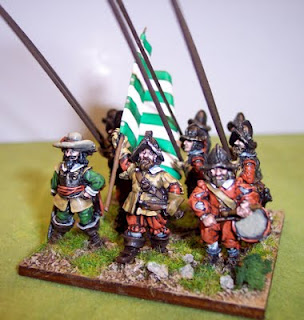 I've read the rules twice. Now, time to give them a test drive.
I suspended all preconceived notions and played the game as is. As I don't have hordes of figs painted up for this (which is odd since its my favorite period), so I made some paper armies using the foot print/stand sizes in the book. P&S doesn't tell you what size stands or how many figs in a unit, but the pictures pretty much show a 40mm x 40mm base for infantry, 3 stands for shotte and 4 for pikes.
We had 6 players controlling a Battalia a piece except for the horse who got two Battalia. The infantry commanders had 3 units/regiments/brigades each of 2 shotte units and and a pike. Using the convention that the pike and shotte operate as distinct units, that meant each commander had 9 units. That meant a grand total of 31 UNITS ON EACH SIDE. Sound extreme for a first go?
We were done in 2 hours. Two.
By turn three I had to tell some players to slow down because they had picked up the mechanics and were essentially fighting their own battles in the middle while the rest of us were still moving around. 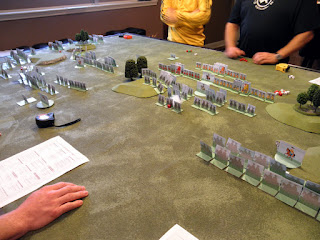 My biggest objection to the rules had been the pike and shot elements acting independently. In practice, no one seemed to care. As thing became jumbled up, it did seem weird some shot was wandering about without the protection of the pike. This was my fault, running the Horse. Mostly likely, still smarting from an earlier sound defeat from my opponent, I was rather rash with the horse. We both went careening headlong into each other. In two turns we were both combat ineffective. Both our Battalias were broken. So, the foot was allowed to run around blissfully free of danger from marauding horsemen. In fact, only one unit the entire game had to form "hedge hog".
A good game. A close game. Next round I'd like to try something with more mixed forces, and also let players mix up the battalias.

Pros: We did a huge battle in a decent amount of time, and the battle "felt right". 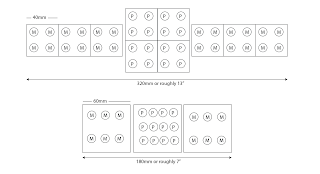 Cons: Space. Below is diagram of how big the units are vs how I've got a few units based up for Victory Without Quarter. A thirteen inch frontage is huge for pike and shot formation. Especially on my 6x 8 foot table, which is a little bigger than most people's 6 x 4. Even devoid of terrai for this playtest, things were really cramped. No room to manuever. This has been a complaint about the Warlord games before. Most people don't have the huge tables of the developers. After showing the boys my how my other units are based, they agreed not a lot of playability is lost with the larger bases but fewer. In fact, the only loss of have a one base unit is that of showing a unit in column. They also brought up the paim of moving the 4 pike bases as opposed to one.
I must ponder this.
From a purely esthetic point of view, the Foundry and Perry mins I have in abundance look too spaced out on a 40mm square. The newer, bigger miniatures, not so much.

Posted by BaronVonJ at 9:37 AM

Thanks for the playtest batrep, interesting reading.

As you say the rules are meant for bigger games which most people don't have room for. I think we'll be using these for club games where space is less of an issue.

Good to see your thoughts.

To me 8x6 is a pretty good size table. Bigger than even most clubs have. Don't know how anyone could play on a 4x6 unless then went 15mm.

J
Overall it was a fun night, with a new rule set. I agree with your observations on the table being too cramped. A couple of additional thoughts
1 it took me a while to grasp the support mechanic, it was a tie breaker in combat resolution, instead of an actual modifier. Since we have played so much FnF, M&R, FPGA, that took me a bit. Perhaps I missed modifiers for support.
2 We did not discover the "Winning" combat modifier until late in the game. That would have changed some of the battles, but no big deal,
3. There was a little confusion about a broken Battilia and what actions it could perform. Units inside it could still advance as long as they weren't at Shaken status. That was just odd to me, out of 9 units, 6 were falling back but 3 were still coming forward to engage. Since this was our first play, perhaps I misunderstand that as well.

Overall though , I had a blast, it will be really pretty with figs.

Thank you for your initial thoughts, Sir.

I will be very interested in further playtests . . . particularly with uneven forces since very few of ECW battles were "balanced".

Yes. We had Gallopers vs Pistolliers last night. My one fire die was fairly useless, and not being able to countercharge sucked.
Interested to see how Swedish style commanded shot mixed with cav will do.
Still thinking of going back to Hail caesar for my Itailan Wars.

Thanks for the review. I've just got this but havent had a chance to read it yet. I'm a fan of the BP/HC mechanism so I think it will be good...
I'm fortunate, I have a large table so space should not be a problem here. I just dont have enough troops yet to give justice...

Thats because you're trying to do it the way it was done.

You can't do that all the time with war games. You have to be more abstract in order to get the practical application; we are NOT likely to do this kind of organization with our armies that are currently in production; a unit will be three stands; one pike and two shotte. A battery will be one cannon; a battalion of cavalry will UNLIKELY be larger than 2 stands of 3 figs each.