Campaign for the Kingdom 2.0 2nd Battle 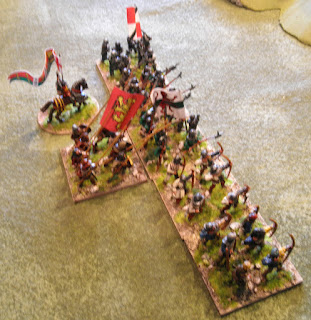 Flush with his last victory, Oswald, Baron of Ock and Lord of the North Marches marched on the capital, assured by his hangers-on that he would be crowned KIng. But, barring his way was Roderick, Duke of Greendale. It seems Roderick, after watching his sovereign fall in battle, had taken up the standard in defense of the kingdom. He would fight for the people, and in turn they would crown him. So, Roderick was quite dismayed when he saw the former king's own son, Rutiger, marching with Oswald.
They met outside the walls of the Stone Keep. 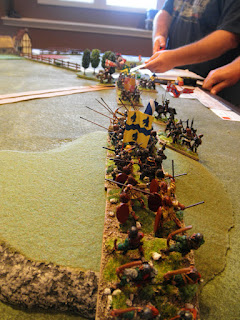 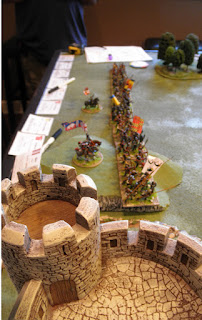 Roderick's
We me again to decide the fate of the kingdom. As usual, each player started with a core of 3 units: dismounted knights, billmen and archers. From there we took turns picking 3 more (kickball team style) until each player had 6 units. Victory was set at 18 Morale points. Loss of a unit counted as 2 Morale points, and each terrain feature one.
Now the best part, rolling for Leader abilities. The contenders must of been tired from the march, because they both came up with a "Plodding". This would limit their Action Deck and their flexibility. All except for Lionel, Baron of Stonekeep. Defending his own lands, he operated at "Brilliant". This would allow him some freedom to operate outside Roderick's command radius. 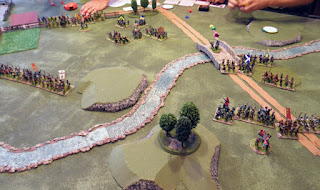 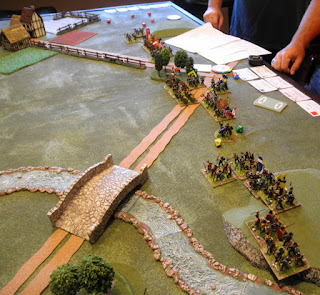 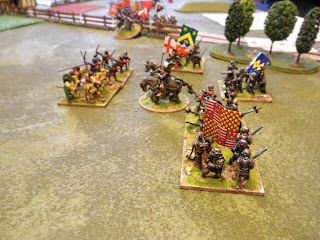 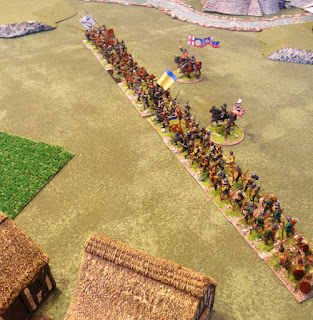 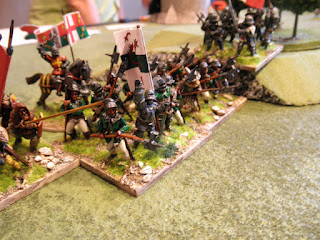 Lionel's troops surge forward.
The battle started with Roderick's forces charging out the gate. All except Lionel, who stood firm. (Mostly because of a failed Maneuver roll, which caused his troops to go on "React" orders instead).This caused the ranks to become spread out, as the faster, lighter troops surged ahead.
On Oswald's side, much the same.
As the troops moved towards each other, most were able to readjust their lines. All except Edwin, Baron of Fennwyck, who's troops seemed to alternate between charging and holding. Charging and holding.
On the Claimant's left, Rutiger's troops were the first to clash. He and Lionel's troops went at it with gusto. Separated by the river, it was a battle in itself. Both battled around the bridge and adjacent woods. Soon, both had lost half their troops.
In the middle, however, was where the battle was decided. Finally coming to grips, Oswald and Roderick's troops hammered each other. This lasted several turns, but was soon over. All but Roderick's pikes fled or were destroyed. A stunning second victory for Oswald (18 to 12). On to the capital!
After the battle Roderick was captured and beheaded. Meanwhile, their was desent in the victor's ranks. Edwin, who had done his part to capture the village, feeling snubbed joined the ranks of the Contenders. Soon he would lead them
As usual, a very enjoyable evening of medieval mayhem. I need to sit down and write my version of "10 Games That Define Me", and Flower of Chivalry will be at the top. 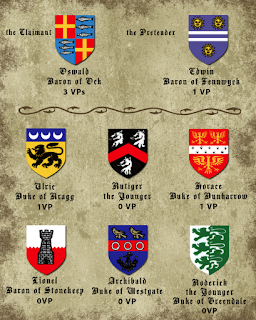 It seems that the 'Champion of the People' is nothing but a champion for himself. I most assuradly fought for my country my fallen king and our people. But Roderick would rather boast and wait, while others fight his battles. The center was taken by me false champion cause you could not do it. And yet you wave around your hand, dolling out favors and beheadings as if you were a king. I will give our beloved country back to its rightful heirs. I will plant your head in the swamps of Ockland and see what foul foliage shall burst from its seed. I will see you on the field of battle, if you dare.

In the confusion, no doubt the heraldry of his "noble" lord was mistaken for his opponent's.

Such a tragedy for the Duke of Warwi...um, the Baron of Fenwyck.

Reminds me of an earlier campaign of the Baron where I. . . uh, I mean, my character. . . lost an arm and an eye for King and Country. Mayhem is such fun!