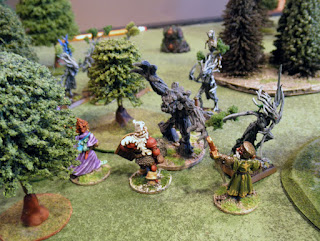 Last night we had the opportunity to play test Scott Pyle's newest edition to the Goalsystem family of rules: Goalsystem Delves. People who have read this blog know I am a big fan of the Goalsystem mechanics. Smooth, simple,  with just a enough luck to make things fun.
We had a new guy over who was completely new to the whole waragming experience. He picked up the game in minutes was yelling at the Ogre to "Die! Die you bastard!"
Over all, another positive experience. I will keep my comments and criticisms to an email to Scott later. 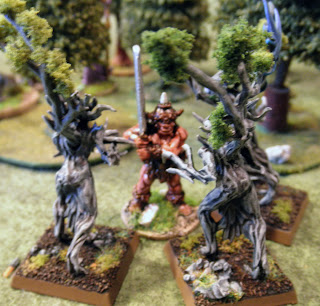 "Ladies, ladies. There's enough of me to go around."
The adventure was split up into seperate "encounters" spread around the board. I kept it sandbox style and let the players choose which places they wanted to go, but said the ultimate goal was to reach the entrance to the Caverns of Doom, located at the opposite end of the table. We had 6 players controlling single miniature of a mix of your usual suspects in a fantasy party (except the thief, who nobody wanted to play). Assisted by Lead Addict, I ran the monsters. 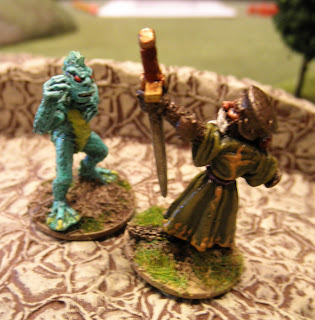 "Friend, have you heard the word of the Lord?"
The party first went to the Haunted Woods. There they fought a mad Druid, who had twisted himself into an evil ent. He was joined by a group of angry dryads. The mage failed a sleep spell and the fighters charged in. The battle was short, and the party escaped with a few scratches and some treasure. 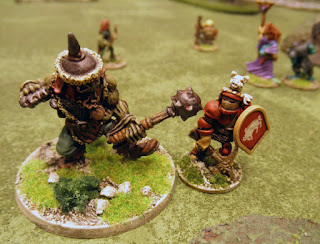 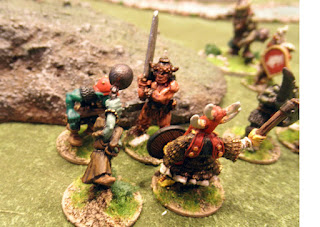 Rygar just can't seem to fight one monster at a time.
Next, avoided the abandoned village crossed the bridge. There they fought the evil Mer-man.
The cleric went first, but did little. It took the Barbarian to bring the fish man down.
Then they came to Blood Pass. They were ambushed by Orcs and an Ogre. This time, a few of them actually took some hits. The Barbarian had to be healed and save vs death to survive. Meanwhile Sir Wulfric valiantly battled the Ogre. The Ogre snuck in a heavy wallop which almost brought the knight down, but in the end, the ogre was surrounded and overwhelmed.
Here, we had to stop because of the hour. I got lots of notes for the author, and had a night of beer, friends and monster bashing. Doesn't get much better.
Posted by BaronVonJ at 7:41 AM

Sounds fun, I may have to look this one up.