I did just little painting this weekend where I actually finished something. Mostly repaints of existing stuff between coats of paint on those Dick Garrison troops I received a few weeks ago. 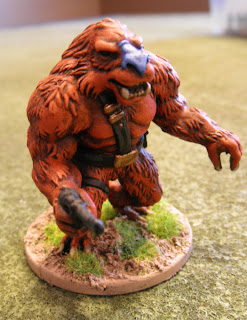 A repaint of Star Wars mini Yazzum. He will be Groth, companion to Lance Vortex, in my Retro SciFi game. 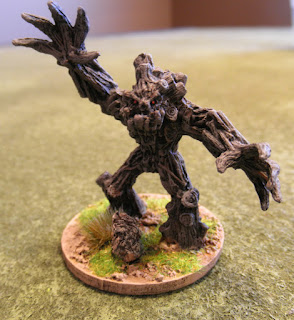 A Wood Golem repaint from Mage Knight. Suitable for Fantasy 15 or 25mm.
The rest of the time was spent digging out troops I've mounted and remounted. Pike and Shotte got me back into army builder mode. Two armies that sit unfinished are my Italian Wars and ECW/TYW troops. One of my few finished projects that we game with occasionally is my War of the Roses armies which generally gets used in our Campaign for the Kingdom battles. What I like about that army is the common basing. Each unit is a single 60 x 60mm square stuffed with what looks right. Pikes have 8-10 figs, billmen 8, and archers 6. If need be, they can be added together to form bigger units like Hail Caesar.
Thus, when it came to base up my Pike and Shotte era troops, it just made sense to do the same, even though these two armies will never meet on the battlefield. However, I come to two possibilities.
1- Some members of the group actually have minis for this period based another way. As I posted before, this basing takes up alot of space and not sure I want to go that way.
2- I have been very inspired by the work of Olicanalad. He's using a different size all together, 45mm frontage.
I took some pics to illustrate possibilities. Gives the sense of mass for 24 figs. 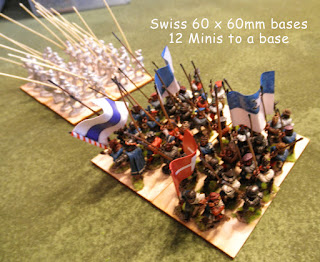 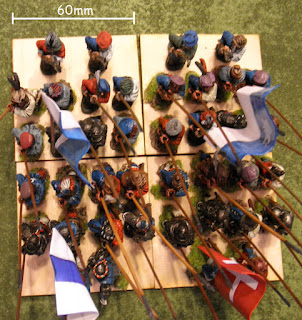 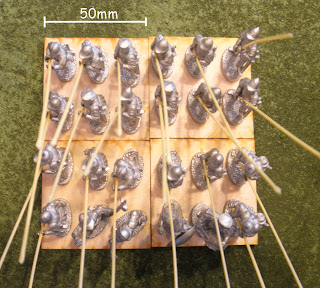 Any thoughts/opinions from the blogosphere? I've decided most other non pike units will be 3 stands, so somewhere between 9-18 minis a unit.

That alien re-paint is inspiring! I love that mini, and he'll scale well with Dick Garrison line.

H'es even big compared to them.
-J

I like the 50mm basing. For pikes it looks good (and you get two units instead of one for the same number of figures painted).

In addition, you can also base cavalry on 50mm square bases (two figures per base) at the same time.

Though I like the look of the 60mm bases with more figs I think the 50mm bases are the way to go.

They would be more interchangable with other rule sets, and a bit easier on the wallet, but still look the part.

Totally dig on the Wood Golem! I've been on a treeman kick lately. Prepping for our big Fantasy supplement play test coming up in two weeks.

I'll have to see if I can find that one.

nice posting.. thanks for sharing.