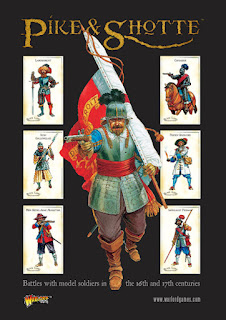 I've been a big fan of both Black Powder and Hail Caesar since they came out. Both are simple, and played with the right group, a whole lotta fun. But, since they've come out, I've also been tinkering with them to work for pike and shot era. I've already playtested HC for Renaissance era, and it worked great. Also, ran an ECW game using BP, also to good results, but both were a little off.
Now it seems Warlord is releasing PIke and Shotte, a stand alone rules set to cover my favorite period, "big pointy sticks, inaccurate firearms and cavalry still wearing armor".
Based on the cover, the rules will cover Italian wars (yeah! Landsknects!) to early Lace Wars (9 Years War/ Grand Alliance)
Per-order now, comes out April 21st. Now, where to scrounge up $50....
UPDATE: Ordered!
Posted by BaronVonJ at 8:52 AM

Sell a kidney. Then you can buy toys too...

I don't think anyone will want my diseased body parts.

Looks cool, I suggest blood plasma or a sperm bank.

Looking forward to these rules too. They should be very useful.