War comes to the KIngdom 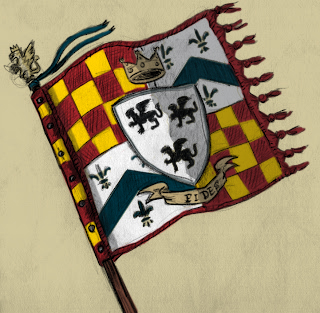 A new Campaign for the Kingdom will begin soon. Rutiger has proven to be terrible king. Since winning the throne a few years ago, the Kingdom has fallen onto hard times. High taxes, border raids, and famine have brought unrest. Now the nobles line up to usurp the throne.
We'll be using the mapless campaign and rules we used in the previous campaign for the Kingdom. I'm trying out some restrictions on recruiting. Only certain nobles will be able to recruit certain troops. This will lead hopefully to alliances and backstabbing.
On another note, sorry for the lack of posts. A combination of brutal work schedules and spring sports practices has me not playing or painting. Stupid work. Stupid kids.
We did have a game last week, but I didn't take pictures as I was using stand in paper minis for pike and shot armies. We played "Victory without Quarter". It's a fun game. Not al lot of command and control, and some odd cav rules to wrap my head around, but other than that a solid, fun set of rules until Blackpowder Pike and Shote comes out.
Tonight: Fantasy by GASLIGHT....
Posted by BaronVonJ at 2:27 PM