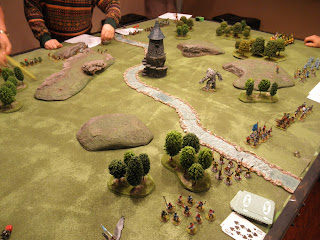 ...or should that be Torchlight. I've been looking for a set of large scale skirmish Fantasy rules for a long time. I've got a lot of single fantasy minis lying around and my dream was to have a ruleset that let me have mixed units, big monsters, crazy contraptions, etc. I modified all kinds of rules with no luck.
Then, I saw on the HAWKS gaming group site (the guys behind one of my favs GASLIGHT) had played a fantasy game using gASLIGHT. Of course! It's been right underneath my nose all along.
I threw together some quickie stats based on what Lead Addict and I had. Made up some spells and put together what turned out to be a pretty fun game. We treated the big giants like vehicles. They had to "Start" (get motivated enough to fight), they had to sustain (stay interested) and generally lumber around causing mayhem. When they were hit we made up results based on the existing vehicle damage chart. Twice my Earth Elemental got the "Engine throttle locked" result. So we interpretted that as him going on a rampage, moving randomly.
A unit of knights on the flank were first blasted with a fire ball, then hit with a spell enforced morale check. They failed, leaving the filed, and the flank, open.
We thought up some great ideas for handling spells and undead.
Next step is making actually unit cards and adding fluff. Should be another nice distraction. 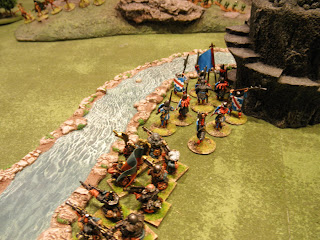 Sorry for lack of pictures. Most didn't come out.
Posted by BaronVonJ at 7:40 AM

Interesting and cool. I could definitely see how GASLIGHT could be adapted for that kind of game.