The KIngdom has been in turmoil since Rutiger the Usurper took the throne. And so it was, that within a year of his coronation, Rutiger was already fighting for his crown.
Oswald, Baron of Ock, Lord of the North Marches, gathered a three of the other great houses against Rutiger. They met on the rolling countryside outside the capital.
The forces were about equal. The King had brought three of his closest allies, men who had been key in winning his crown. As the morning fog burned away, the forces face each other. Battle lines were crisp. Flags fluttered in the breeze. It was all very beautiful, really.
Then, a single horn cut the silence, and Rutiger's troops lurched forward. Across the field, Oswald's men did the same.
Both sides fought to keep their lines tight, but both had starts and stops. Some nobles stopped to allow their archers some play. Men fell.
It was finally in the center, where Rutiger and Oswald met. The king's men would get the worst of it. The center was not holding....
On the flanks, Royalists troops were beating back the rebels. It looked like it would be a close thing. 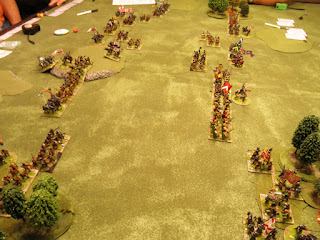 Then, the center gave. Rutiger's men fled the field. With their king retreating, the royalists retreated. In the confusion the king fell from his horse. Oswald's men captured him.
There, in within sight of his capital he fought his own uncle to take, Rutiger lost his head.
The king is dead. Long live King Oswald!
As usual, Flower of Chivalry gave us a great game. There was a lot more use of the Marcher Men (Welsh and Irish auxillaries really), They proved tough troops. I hope to add some light horse to the mix, and some fantasy elements. The campaign is off! Read more how the campaign works here. 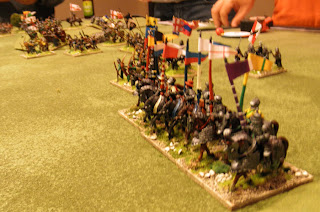 Also, we had an extra treat. The National WW1 Museum (the biggest & best in the country) is sponsoring our local con RECRUITS. This weekend, the museum is letting RECRUITs host several games in the Museum's main hall. Among them will be a trench game that one of our group brought in to test last night. 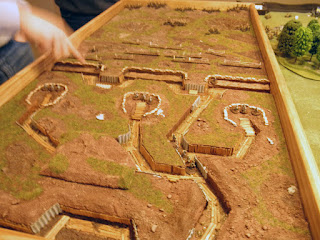 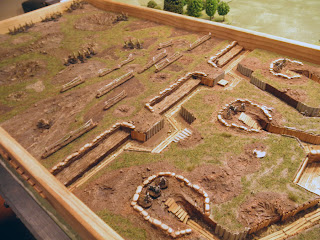 As you can see very cool. Packed in nice little 2x4 carrying case.
Posted by BaronVonJ at 8:05 AM