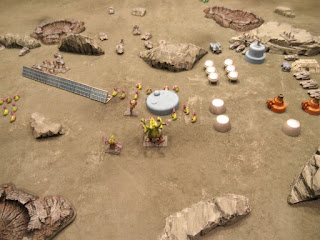 I missed out on a lot of games last weekend when I couldn't make RECRUITs. One I especially wanted to try out was a game of Future War Commander put on by fellow Basement General, Greg. It was pretty game with lots of lunar terrain and vehicles and aliens almost exclusively done with Mechwarrior and MonsterApocolypse repaints. 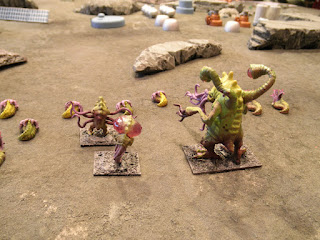 I've always been a fan of Blitzkrieg Commander, and have read FWC a dozen times but never played. The scenario involved first contact between the humans and all their tech and an alien hive-mind race. Of course things went bad immediately. 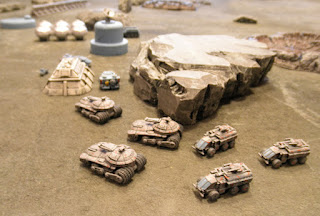 On the alien side we had a creature that could project a forcefield dome, one that could teleport into close combat, a giant beast with horrific ranged weaponry and hordes of little squishy thing to tear and rend. It didn't do us a bit of good. 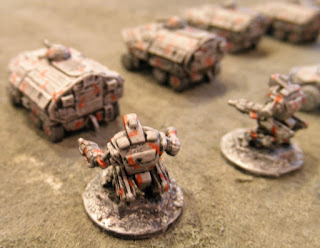 Our plan was to be very aggressive, but we just couldn't mount an attack. We lost most our forcefield troops off the bat and our hordes died quickly. Not a good first showing for the new fearsome race.
I still really like the rules. Robofire! wins for simplicity and quickness, but FWC has a bit more depth. There is also included in the rules, a version for playing 28mm skirmish with essentially the same mechanics. Looks like I got some painting to do. 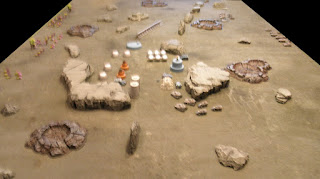 Posted by BaronVonJ at 6:58 AM

Looks like a great game and I love the forces involved. Being mostly repurposed prepaints too is inspiring. It's always good to read some FWC batreps.

So I assume you could play it with micro armor as well as the bigger stuff? Just from a numbers perspective. easier to get numbers in micro than 15mm.

How many units a side?

we had a crap load of troops out there.

Great to see the Monpoc out too! Beautiful looking table as always.