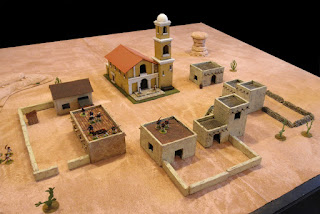 I started work on a Horse and Musket version of my Fistful of Lead rules. Even though we've played this variant before, last night I wanted to try a few rules suggested by the Yahoo Group. The biggest change between the two sets involves reloading. With the Wild West version, you don't keep track of ammo. It is assumed the models are reloading between volleys and only have to truly reload when they roll a "1". 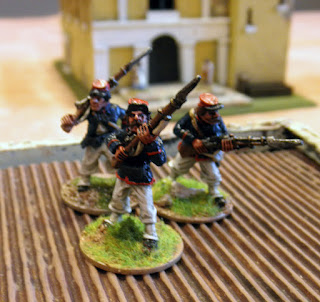 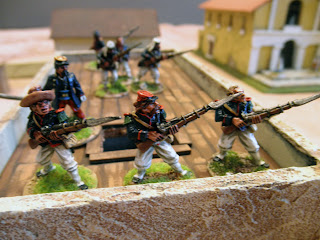 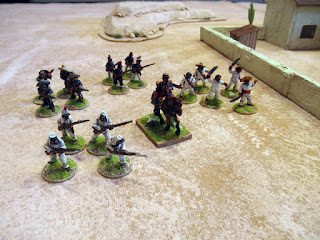 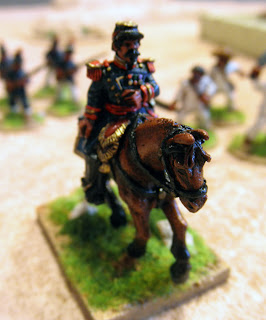 With this period centering around the single shot, muzzle loading musket, you get one shot and then you have to reload. We tested the two schools of thought on my poor ol Legion down in Mexico. 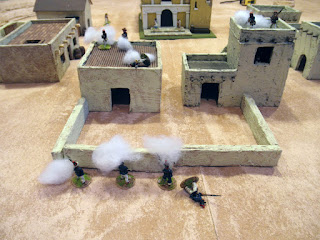 The Legion keeps the Republican's heads down 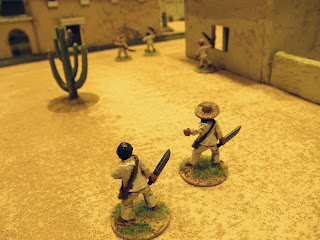 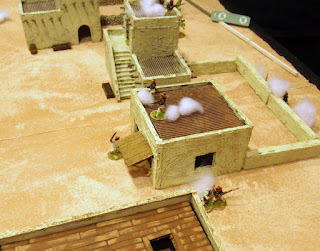 Outnumbered once again they were set upon by Republican forces. The Legion played it how we've always done it. After shooting,  the model gets a x2 reload marker (in this case we used 2 cotton balls of smoke for cinematic effect). Since a model gets two actions per turn, they could on one turn, fire/reload. Next turn, reload/fire, and third turn reload/reload. Thus, the Legionaires in a defensive position, were able to keep up a steady stream of fire.
The Republicans however tried a different rule. Each time their muskets were empty, they had to roll a 6+ to reload. This could potentially give them a higher rate of fire, being able to shoot every turn if they didn't move, or they could roll crappy, as they did in the game and hardly get a shot off. 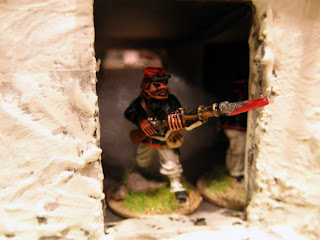 Blood added for effect
A great time was had by all. In the end, it came down to a heroic stand by a lone Legionaire in the doorway of a hacienda. He single-handedly killed 6 men before going down. A posthumus Pour le Merit is in his future.
I think the group leaned more toward reload markers rather than roll. The roll method offered some fun aspects, with wounded guys, or militia  be less likely to get the roll quicker. But where we ran into trouble was where that roll fit in with timing of moves, etc. It's much easier to plan, knowing when your guys will be fully loaded.
I might still put the roll reload method in the rules as an option.
Posted by BaronVonJ at 9:39 AM

I am glad to see the picture of the heroic Legionaire came out. He was one tough grunt to overcome!