Salacia is considered by most of Unkerlant as little more than a den of thieves. Yes, most Salacians do have a tendency to “borrow” things that don’t belong to them, but to be fair, it is a dreadfully poor place. The soil is poor, the animals are unhealthy and the weather is lousy. These facts have made most Salacians very resourceful about making ends meet. However, stealing from each other has also turned a few thefts into all out blood feuds between families. The Brunstedler-Lidzgefeldt Pig War has been waged for almost half a century over the theft of a hog.
The two major towns in Salacia are Ferlangen, known for its’ salted eels, and Salzemund, where the salt comes from. Ferlangen is a trade hub of Unkerlant and ships it’s eels to every part of the kingdom. They desperately need the salt from Salzemund for their trade and Salt Guild of Salzemund knows this very well. Each town has found ways to gouge each other blind in the trade arena.
Presiding of over all of this is the Margraff Dolf Von Salzemund, probably the only portly person in Salacia. The old Margraff is so big, he uses a wheel barrow-like cart to carry his mass around. Most of his courtly business is done from behind a massive plate of sausages.
Salacians can be great warriors when called to the colors. Their bravery, however, is proportionate to the amount of plunder to be had. 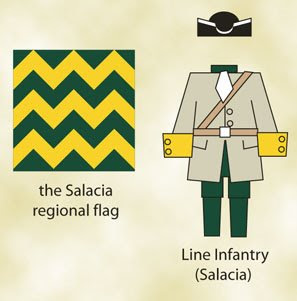 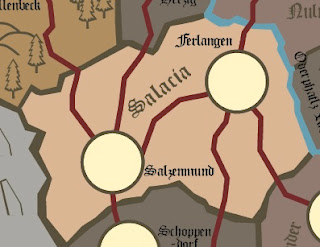