The Baronies
The lands known as the Baronies are one of the few areas in Unkerlant with somewhat decent farmlands. Most of the soil is given over to the growing of potatoes, onions and cabbage, the staples of Unkerlantian diet. The Baronies are made up of 13 separate lands of varying size. The smallest, Weniglant is little over 100 acres.
The borders are constantly shifting as farmers and barons alike move boundary stones with little regard for their neighbors. This not only leads to almost constant squabbles, but also leaves the peasants at a loss to who gets their taxes every month.
The two largest towns are Marburg and Wurtbad, both of which would be considered large villages in most of Europe. A great rivalry exists between the two, which culminates in a yearly festival where Marburg and Wurtbad play a match of Unkerlant’s favorite pastime (besides warfare) Kanonball. This often grizzly sport is similar to rugby but played with a canon ball and blunted pikes.
When called to war, the Baronies muster their civic militias. These soldiers are members of the local guilds and form their own platoons, such as the Royal Cheesemongers and the Wheelwrights.
Nominal command is given to the largest barony at the time. The current commander is Baron Wulfrem Von Wurtbad. Von Wurtbad is a capable man, but often plagued with gout and confined to a carriage. This leaves the militias to the not-so-capable, Baron Favio Vermechelli, an Italian barber whose amorous relations with the Baroness Von Knottel has elevated him to his current post. 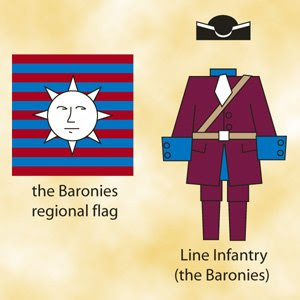 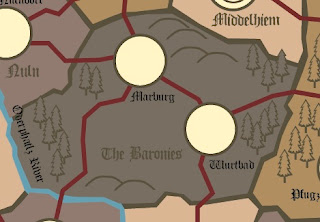 A mini-country full of character!
I wonder... how many participant countries and factions, in the end?
Thanks for sharing.