Settled between a fork in the Blut River and the mountains, Ostland is a wild and unsettled land, full of rolling hills, dark woods and marshes. Most Ostlanders are thought of as barabarians by Unkerlanters. Ostlanders welcome this as a compliment, and have been known to use their rugged reputation to bully outsiders both in the political realm as well as trade.
In truth, Ostland is an unforgiving land. Hard winters have bred a tough people and an even tougher breed of sheep. The bedeutenbiter has a particularly rough coat that becomes extremely warm wool, albeit also extremely itchy. The sheep are also really bad tempered, known to bite and attack small, unattended children.
Ostvald is the provincial capital of Ostland high in the foothills of the mountains. There the locals show off their wealth from the wool trade with ostentatious displays of colorful clothing. Being a stoic people by nature, it is considered poor form to be caught scratching at the very itchy wool that has brought them their wealth. Ostvald is the home of Margraff Konstantine Von Ostland. The margraff is a huge, bear of a man with, unlike his stoic people, a temper to match. Konstantine is also famous for his completely bald head he has had since birth. A hair has never grown on his head, but everywhere else is a different matter. The Margraff has managed to produce 13 equally hairy offspring, in a land known for it’s high child mortality rate.
Normark is the only other town of note in Ostland. Known for nothing more than it’s brutal weather, Normark is really just a way station on the road to neighboring Zlobenia.
Ostlanders make great fighters. All the internalized emotion becomes unleashed on the battlefield. 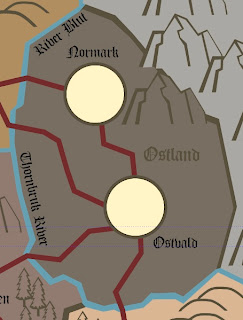 Posted by BaronVonJ at 8:51 AM

Full of character, as always.
How mant more can we hope for?

There are 26 provinces to Unkerlant.