Averland’s rolling plains make it fine horse country. Averlanders are some of Unkerlant’s best horsemen. The sturdy little breed of Averlander horse are descendants of Turkish horses introduced during one of the many incursions by the Turks over the centuries. Blutt Pass, one of the few openings in the surrounding mountains that have both protected and isolated Unkerlant, has been a highway for many invasions into Unkerlant. These “visits” have left Averlanders even more xenophobic than other Unkerlanters and more adept at defensive tactics.
Averlanders have mastered the use of war wagons. Foot soldiers are vulnerable to cavalry on the open plains, so Averlanders learned to circle their sturdy supply wagons around the infantry and use their own horse to make counter attacks. The wagons became even heavier and started carrying light guns.
The two largest towns in Averland are Hochsleben and Agbetten. Hochsleben considers itself the capital of the southern lands of Unkerlant, although nobody else does. It’s mainly known for it’s beer, brewed by the Mueller’s for 7 generations. Mueller’s Hochsleben is an Unkerlant favorite, sponsoring the local Kannonball team.
Agbetten is Hochsleben’s poorer relation, mostly known for a cheese made from horse milk. Agbetteners are a coarse folk, hardened by years of invasions and harsh winters on the plains.
The current ruller of Averland is Countess Alfreda Von Averland. Although the Countess is but fifteen, she has been quite active in the affairs of her people. She is known to ride across the southern plains in her Cossack-style attire, trailing attendants, suitors, and the rest of the court behind her. 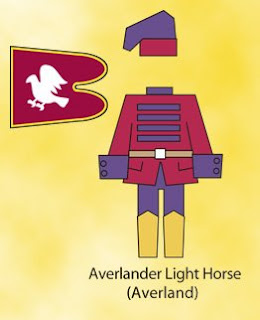 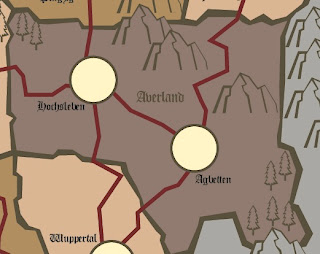 Posted by BaronVonJ at 9:51 AM

A County full of character - an opportunity to field colorful and original minis: the Countess herself, for a start...