Sir Arnulf (Arnulf Ax-in-the-Back) was not gifted by the Duke with the best lands. Both the land and the peasants were unproductive and sad. What's a knight to do raise some revenue?
A little "tax collecting" from the neighboring fief of Sir Douglas.
No sooner were doors getting kicked in, and chickens and grain being collected, when Sir Douglas shows up. I quick blow on the war horn alerted Sir Arnulf's reinforcements they were needed.
Unfortunately, Sir Douglas brought back up, too. 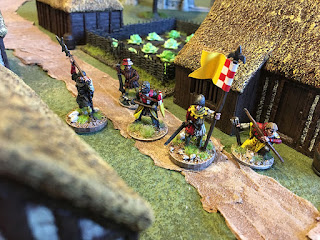 Sir Arnulf, doing what he does. 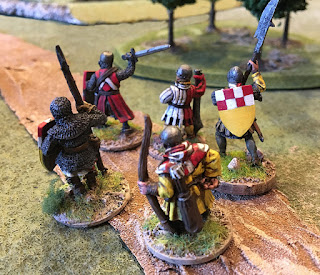 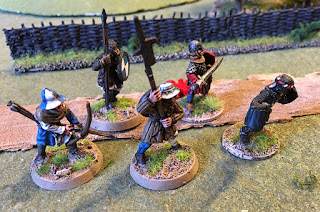 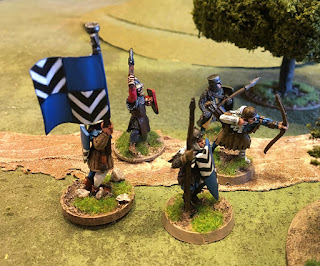 And his back up, Sir Gregory
At first, Arnulf went about the business of looting and pillaging. But then a quick footed, enthusiastic foot soldier of Douglas came screaming down the path. Arnulf's archer, being quite the sniper, put aa arrow through his eye. The fight was on. 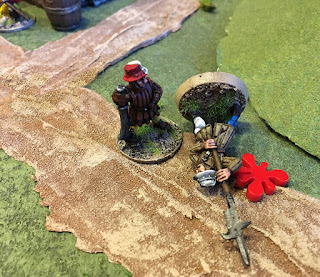 "Come at me, Bro!"
After using his trademark move, "ax in the back while your opponent isn't looking", Arnulf went for the coup de grace. Even with the help of his trusted sergeant, Arnulf was unable to finish Sir Douglas off. In fact, he went down with a sword in the gut from the prostrate Douglas. 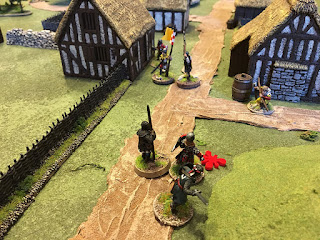 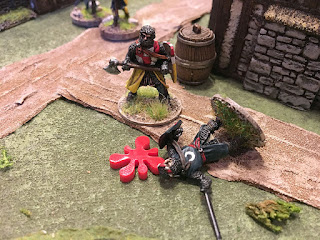 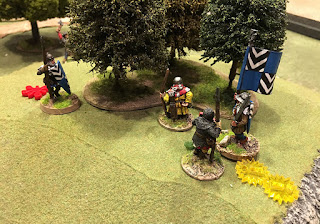 The last stand on the hill
With their master gone, all of Arnulf's forces took an immediate gut check. "Why are we here when are lord is gone?" This required rolling as a Recovery check. Everyone passed! Loyal to the end.
And it was the end. The invaders were quickly finished off or sent packing.

A great little game which we played after doing a quick play test of some larger scale rules for Fistful of Lead. This is different from Big Battles as it uses bases of troops versus large squads of soldiers. Sorry, no pics, they were paper soldiers...

Some extra rules we used for our Medieval skirmish:
- Armor saves are reduced by wounds and shock just like anything else. The thinking behind this was a soldier was less effective at using their defenses by being wounded or dazed with shock, allowing an opponent a chance to get in shot in a vulnerable spot.
- Miniatures with more shock than remaining wounds must leave the field.
- Gain negative Renown for Knights for attacking a lesser foe when another knight was closer.

Posted by BaronVonJ at 9:24 AM

Great AAR! So is there going to be a Fantasy/Medieval FFOL in the future?