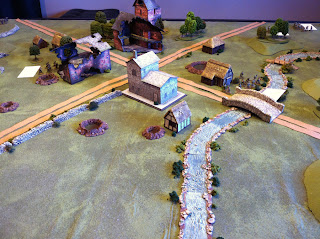 We had a fun game of Victory Decision last night. The scene was a strategic crossroads. The Germans already had a recon team there, and the Americans a rifle squad. Each turn a new until would enter the board of the players' choosing. 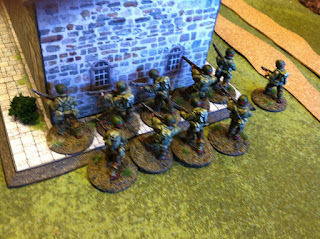 Off the bat, the Germans got hammered. They couldn't get in position without being forced back. In VicDec you take suppression for just being fired at, plus one for every casualty. As soon as a unit has as many suppressions as miniatures, it is shaken and forced to retreat. A Shaken unit may only move or Regroup until its unshaken. 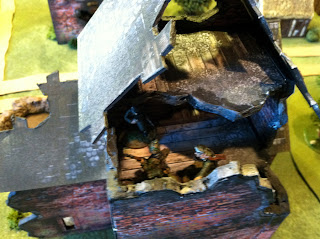 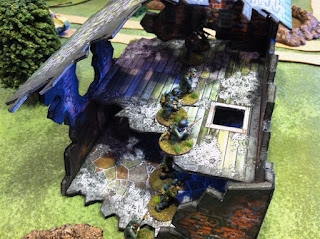 The tanks from both sides came on the board soon. A Panzer IV quickly dispatched a Sherman, but was in turn taken out by another carrying a 76mm.
The Krauts spent most of the time on their heals, never quite able to counterattack. It was still fun and worth more playing.
The mins and very cool paper terrain and more picks by John.
I have played ALOT of WW2 games. This has been the only one I've liked. It abstracts what needs to be but keeps the feeling of small unit actions. The only I haven't liked is the activation phase. It works with 2 players on a small scale, but bogs down with lots of players and unit. Agis has posted that on the upcoming SciFi version he has a new, better activation sequence. Can't wait to try it.
Posted by BaronVonJ at 7:28 AM

I have zero experience with any other WW2 games, but I think this game is starting to become more and more fun each time we play it. As always, thanks for hosting.