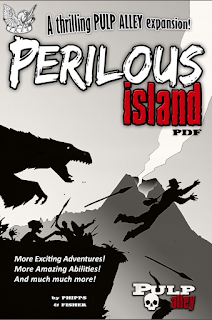 I loves me some Pulp Alley. So much so I painted 8 Leagues. So, I as you may guess I was very excited to receive my pdf version (hard copy to follow), via email. Haven't read yet, but a quick perusal looks very promising.
Perilous Island contains new perks and abilities, including "weird" ones to bring in the supernatural elements, dangers, and cards. It also has an entire campaign set on, you guessed it, Perilous Island.
Can't wait for the likes of Red Raptor, Wu Fang, Grey Ghost and others to trek its jungle vastness. 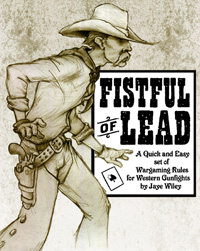 On an related note I've been working on my own sequel of sorts. For many years, fans of Fistful of Lead have asked for a campaign system for the game. I have held off mainly because every commercial campaign system I have played breaks down quickly. One side, after a couple of victories gets so far ahead of everyone else they're unstoppable. On the flip side, players who lose a couple game in a row, end up so chewed up, they don't stand a chance, and quickly lose interest.
Most campaign systems also require a way to build teams, warbands, gangs. This requires a points system. Points systems never work. Period. This has been my question especially since Fistful of lead doesn't use stats or abilities. A guy is a guy.
I may have found a way around it. No points, other than campaign or reputation points players build up to be spent along the way. I'm trying to prevent super teams. There will be a host of scenarios players can do, each leading to a final showdown of sorts.
Cross your fingers.
Posted by BaronVonJ at 11:25 AM