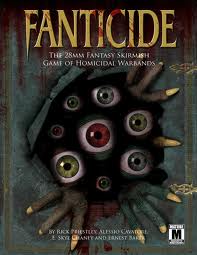 I had some Paypal money saved up from sales of Fistful of Lead. I usually use this money to buy stuff I normally won't get out of pocket. I've been looking for a largish Fantasy skirmish set of rules for our Thursday night games, and from several reviews decided to spend my "free money" on Fanticide from Alien Dungeon.
I'll start out by saying from my research I went into this purchase knowing I would not be using Fanticide's background world Nowhere, and certainly not their goofy warbands (flying monkeys, eyeball creatures, etc). But, the mechanics sounded right for what I need.
The production value of the book is nice. Hard backed, good photos. But almost too much. Large type and big photos seem to be used as filler. The book could be half the size it is. The rules themselves don't take up that much space, which is fine with me, I need quick rules. But then the rest of the book is made up of background stuff, as I mentioned before, wasn't the draw for me.
The actual rules are fairly simple. Each unit or Homicide Squad (dumb) gets a cue card that is shuffled into a deck for card driven activation. Leaders get extra cards so a unit, could in theory, move more than once. You can add in events to the deck to make things interesting.You have leaders, shooty guys, tough guys, regulars, monsterous thing, tiny pests, etc. You have stats for all called Virtues and Vices. Give (attack) and Take (defense). Basically roll a d10, added to your Give (again dumb) and conpare to your opponents Take + d10. Beat them by more than their Soul (wounds) and they are dead. Beat them by less and they are stunned.
Simple unit to unit battles. Should go quickly even with a large group. But, nothing that hasn't been done before. Its actually really close to what I was planning myself for some rules.
They have premade warbands and rules for making your own, but they are really generic. So, alot of work to be done on that front with a vague points system that I could easily screw up.
For me, even as "free money", $55 was alot to spend for very simplified rules. In playing, I'm sure I'll get some depth I don't see in the read thru. I realize these rules were probably written to drive sales of the minis. Just not interested.
Look for AAR in the future.
Posted by BaronVonJ at 12:42 PM