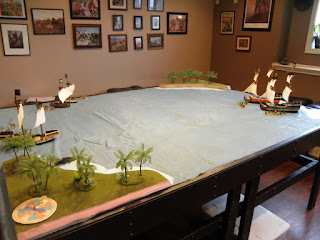 Ahoy! It's been a crap week. My solution? Rum and a goofy hat! I dug out my Pirates and their ships which I haven't touched in a loooong time. The scenario would be a 3 way scrap over control of an important straight. I commanded one of the smaller vessels, and though not as nice as Wingnut's and the lads over at Fistful of Seamen, my ships were built 10 years ago and are more utilitarian.
We captains of the two smaller vessels opted to mass our fire power and take on one of the bigger ships, though not the largest one. We avoided Scurvy Bill and went for the Wraith and her Captain, Gangerous Greg.
Captain Greg and Bald Scott, were against the wind, and decided to fight this battle more like a fortress would. Stay in place. Meanwhile, Scurvy Bill just sat back out of gun range and waited for us to kill each other.
We used Pirates! by Flagship games. A fun, simple set of rules. Shooting is done by placing splash markers (i used golf tees as they look like water spray) and then guess-timating the range. The true range is then measured out to the marker and results rolled. Simple and fun.
After a couple hours we had three ships sinking (including mine) a boarding actions repelled, and a clear winner (Scurvy Bill). When Bill finally joined the fight, his fire was terrifyingly accurate and damaging. 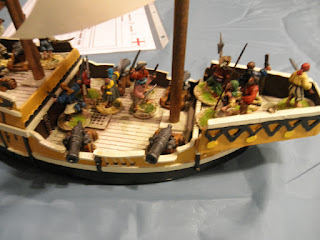 The crew of the Siren 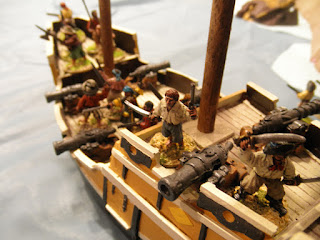 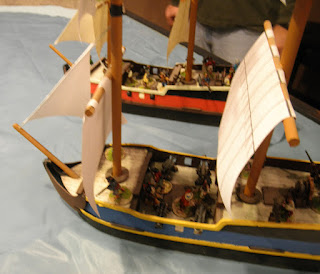 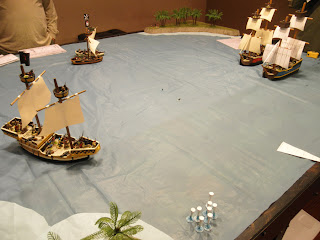 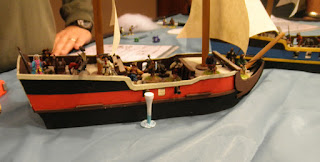 Just missed 'em!
With my rowboat shot to pieces and ship sinking my boys were chum. Tonight's pairing: 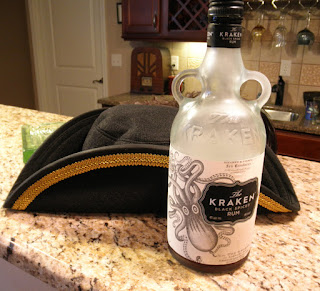 The Kraken, of course. A bit of lime or add cola if ye be lilly livered!
Pictured taken after the crew took a few swigs.

What a great looking and fun game! I haven't heard of Pirates! but it sounds like I may have to check it out and build some LEGO ships.

Being a Kraken victim, err, veteran in the past I heartily endorse its use on the high seas. Try it with some diet ginger ale next time, even better.

According to the official Kraken website drinking menu, you can do it with Ginger Beer. Which I tried and found too sweet. I usually drink it with a twist lime and coke, or buy itself with lime (to prevent scurvy).
And Pirate!s may be on its second addition. Its a fun game that has rules for fantasy, too. I'm thinking of tweeking it, as I think it uses way too many die-types. A d10 or 2d6 would work easier. Also want to build a purely 28mm Dwarven fleet to fight the Porridge Wars. Probably scratch build alot with a eye towrds the early Dreadnaught period.
-J

So where does the Dwarven Fleet go in the priority list?

Before Carlist Wars, but after Samurais.