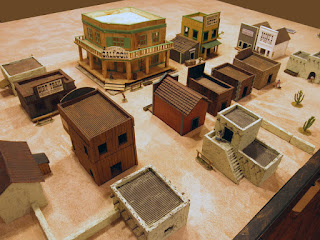 Fistful of Lead. An oldie but goodie. I wanted to try out some ambush/hidden movement rules I'm working on for FfoL Horse and Musket and decided a Wild Bunch/Northfield Raid. The bad guys start in the bank and have to make it to the Livery Stable. The good guys start hidden, aware of the baddies in the bank. Unknown to the good guys, there are more baddies hidden around town. Recipe for a bloodbath.
At first, even though outnumbered, it looked like the robbers had the upper hand. The Marshal's men and the townfolk were dropping like flies. But, the bad guys got caught up in the shoot outs and rather than moving towards the stable, were slowly being overwhelmed by numbers. 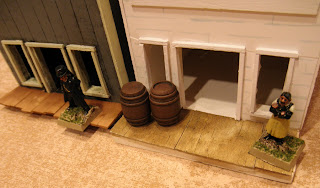 "Well Bob, looks like a typical Thursday. I'll get the coffins ready." 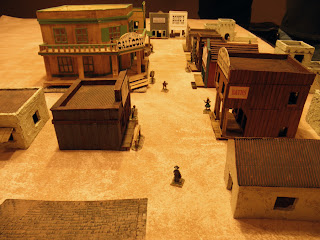 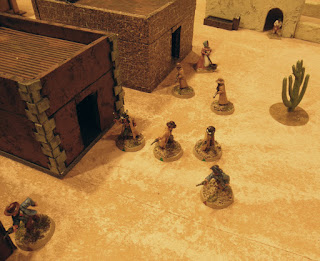 The Robbers break out. 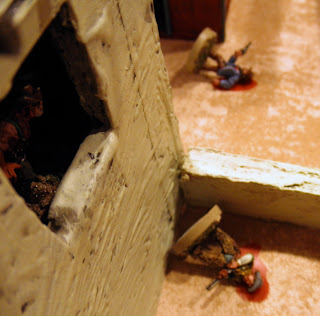 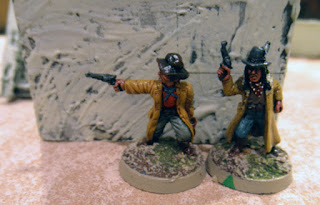 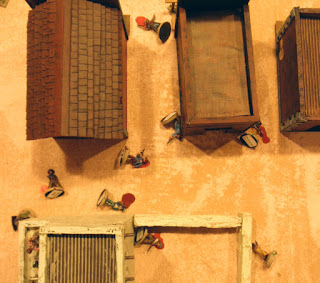 Blood Alley. Almost 20 years of playing this game, and there's always a Blood Alley.
By the end of the game, a lone bandit was being slowly hunted down by the survivors. Best moment of the game: The Marshal stepped out into the street and was fired at "manual insertion range" by one of the bank robbers. Marshal brains all over the alley.
Tonight's game was fueled by a favorite: 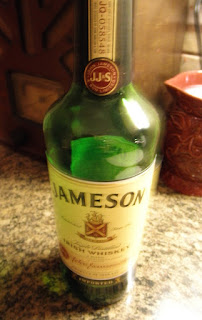 Posted by BaronVonJ at 6:40 AM

"Fistful of Lead" is a great Convention game. Easy to learn and play; lots of fun too.

This is the first game I remember where the Marshall and all his deputies didn't die to a man. Lost the Marshall but the deputies got their revenge!