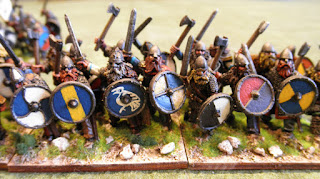 It was time for a Dark Age slugfest. I used the same rules (Flower of Chivalry) we use for our "Campaign for the Kingdom". They still work well for 11th century.
A large group of marauding vikings led by Horst the Wily, are stirring up trouble. They've managed to secure some Breton mercenaries and are burning they way across the countryside. The local lord Duc' d'Lindsey, has mustered the troops and moved out to stop them. 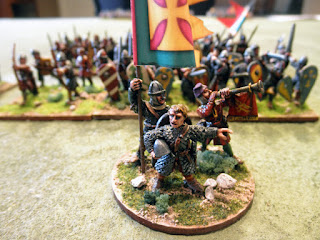 The Lord orders his troops
Lord d'Lindsey was feeling spry that morning and was rated as "Brilliant" (more 3 action cards in his deck). Meanwhile Horst was a bit in his cups, as thus, "Plodding". 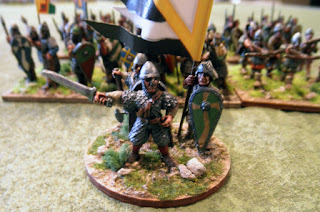 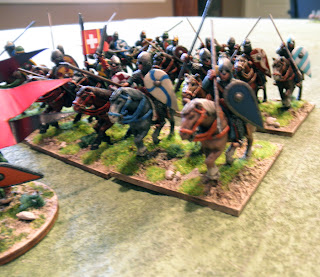 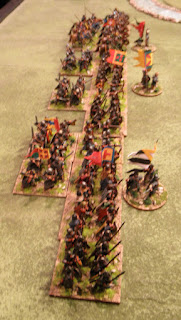 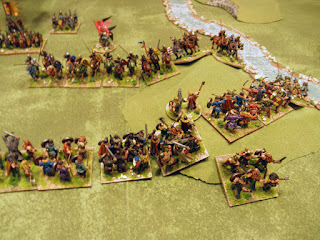 Battle for the hilltop. 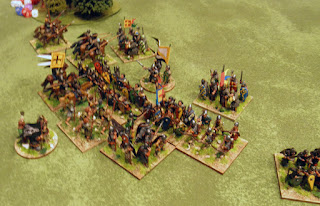 A class of Normans 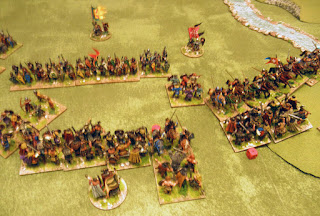 The lines reform, then break.
As the battle started, both sides began a slow crawl towards each other. All except the viking right flank. There, Gregor the Obviously Mad, charged forward. By the time he met the Norman cavalry division, his men were exhausted. They held a small hill top, but would suffer.
On the Viking left, Guilliame the Old led the Breton mercenaries. He waded into the fray with gusto, wiping out 4 units off the bat.
With the victory conditions set at 9 units, it looked good for the Northmen. They had taken out 7 Norman units for a loss of only 4 of their own. Two more meant victory.
But, that is where things changed. Thor abandoned his followers. Within a few scant turns it was tied 8 a piece. Horst's command hadn't lost a unit. The center was tight, but in the end, the Normans snatched away the victory. The vikings fled for their ships empty handed.
As usual, FoC provided a great game. Lots of twists and turns, and always different from game before. I think I'll have to try it at RECRUITS some day. NOw, I'm painting some Dark Age stuff to try this with Hail Caesar and compare.
Posted by BaronVonJ at 7:59 AM

Hmmm, I've got a copy of "Flower of Chivalry" somewhere but I've never read it . . . your post makes me want to dig it out and give it a read.

Guillame the Old? Thanks Jay. :)

Jeff,
Duh-oh. After all my other posts about the campaigns using FoC, ya just now ant to try it? For shame....
Bill, I could have chosen less flattering names.

Hey, please consider that I've been rather ill (cancer) and have been "out of it" for a long time (radiation, surgery, long hospital stay and now chemotherapy).

Jeff,
Sorry to hear about that. Keep fighting the fight, and keep the blue bear flag flying. The prayers of all Unkerlant are with you.