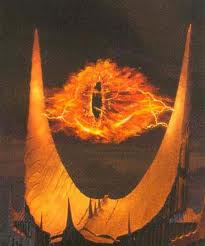 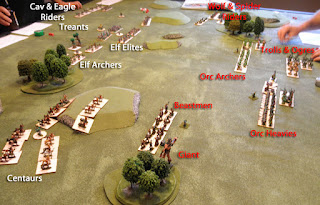 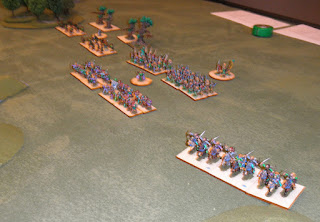 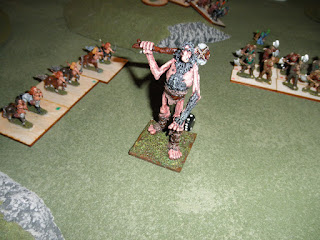 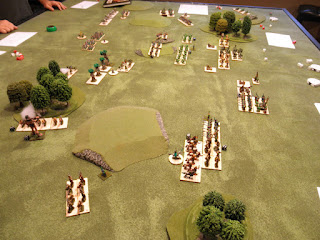 We adjusted the armies slightly since last week. Orcs are more a mix of Gauls and Huns and Elves closer to medieval English mixed with some heavy cavalry. We must have done good because in the end, it was tie.
The opening of the battle saw the elve's centaur allies charge pell mell at the beastmen horde and giant. The giant smashed the pretty ponies, only to go down to a hail of elven bowfire later.
The orcs had trouble getting the center moving while on the right flank wolf and spider riders sparred with the elven flyers and cavalry.
After much pushing and shoving, the center broke for both sides and it was decided both sides limped off the field in a draw.
Many troops types and units, and it still played to conclusion in 2 1/2 hours. We didn't use magic rules but they seem pretty simple and best all, I think everyone is excited. I get to dust off all the 15mm fantasy I bought 20 years ago, and people are actually buying new lead for a group type project. Ral Partha Europe might be getting a large Demonworld order from Kansas City.
Please excuse the lack of proper finished stands. As a general rule we don't usually field unfinished armies, but this was a playtest. Now that we are settled on a size (which will double as units for Commands and Colors) we can finish them off properly.
Posted by BaronVonJ at 6:51 AM

Nice to see this project moving on. Sounds interesting. There's been a fair bit of interest on the other side of the pond about fantasy adaptions for HC, so good to see some put into practice.

Look forward to some more batreps in the fullness of time.

Agreed. Good looking game on a subject that isn't seen in wargames often enough. Love that giant! What mini is that? Well done. - Mike

Great to see you guys trying out this rules variant and blogging your battle reports. Many thanks!

Baron, Do you have a copy of those rules you could send me? Ever since I started reading the HC rules, and playing them, I've been sure they'd work a treat for a Warhammer stand in. If you could, abhuntatearthlink dotnet. I would appreciate it.

It's all on the Hail Sauron Yahoo Group:
http://games.groups.yahoo.com/group/HailCaesarFantasy/?yguid=113262516
more files there than I could send you.
Hope it helps.
-J

Thanks Baron. That was very helpful.