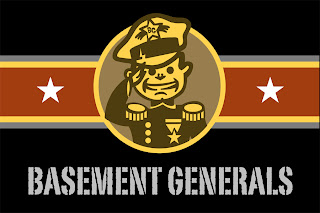 September 14th-16th will be the 20th show and 10th year for our local wargames convention, RECRUITS.
As mentioned before, I can't say a enough good things about this con. Plenty of games, a friendly atmosphere especially to newcomers and kids, which is unusual unfortunately for our graying hobby. We get some great games and vendors. For whatever reason, we have a rather large collection of wargamers in the greater Kansas City area.
Our special guest this year is Rob Adams, he's the writer of "When The Navy Walked" and "It Came From Beyond the Still."
On top of that, many of the Game Masters from the original show will be returning to put on the game they ran the first show.
I will be running my "Fistful of Lead" game while Lead Addict runs his Post Apocalyptic version of it.
We'll also have honorary General, Cluck Amok running his gorgeous 54mm Battle of Quebec game.
MIdwestern hospitality, hotel rooms are cheap and I promise its worth the trip. Come see KC's truly wonderful National World War 1 museum while you'll here, too. Best and only in the country.
Posted by BaronVonJ at 2:46 PM

Looking forward to seeing the pictures from this one!