Last Thursday saw the French taking on the Austrians in a 6mm Grande Armee slugfest. As Grandpa would say, "A real Slobberknocker". 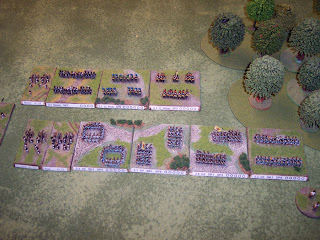 In my opinion, GA is the best set of rules for large scale Napoleonic battles. The Fast Play version is even better. Combine this with Scott's beautiful 6mm armies, and you've got yourself a wargamer's dream, great rules, pretty figs and a game that finishes in 3 hours. 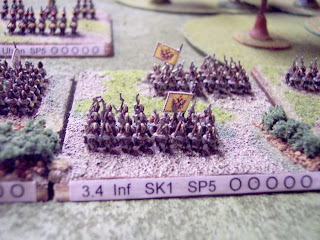 I was on the Austrian side along with 2 others, and my 9-year-old son was Napoleon himself, assisted by two adults. The battle started with the Austrian gaining the initiative, but our left flank wouldn't move. Luckily for us, neither did the French opposite him. My troops on the right made a mad dash for the village ahead. My light cavalry was driven off by some French heavies, but it was the distraction I needed to move my Grenadiers into the village.
On the left, my Austrian brethren took another village. The object of the fight was to control 2 of 3 towns till the other side broke. As the forces collided, losses started to mount. We had a breakthrough in the middle, but night was closing. A battle in the woods in the center bogged down both sides and casualties were piling up. 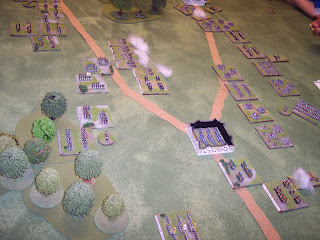 As night fell, the losses were dead even, but we held the towns. Napoleon was stopped, for now. 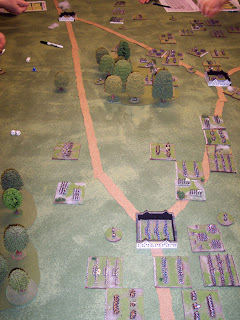 Posted by BaronVonJ at 8:32 AM

Interesting, the blocks were quite nice, though not to my own taste (I'm afraid that much below 15mm, my eyesight leaves a lot to be desired, sigh).
The best part about it was the participation of your son! Not only passing on the tradition, but being able to share an activity!
:)
A

That looks an excellent game. The bases look spot on. Are they 3 inch bases? I was really tempted by that size as it gives much more freedom for creating nice looking bases.

Yep. 3 inch bases. You can see each one is a little diorama. Some are in square, some in line, etc. When they are all lined up touching they make a continous scene.
Pretty cool. Can't say enough good things about GRande Armee or its sister for SYW Might and Reason.
-J

Nice armies, but I am very much taken with your depiction of villages/towns: very effective and functional, and aesthetically pleasing as well. I think I might use the concept for my 19th Century army level games...
Cheers,
Ion