Dragon Rampant: Everybody hates the Undead 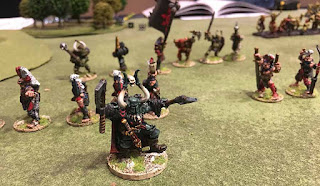 In our last game, the Forces of Chaos and Darkness triumphed and moved ever forward into the lands of the Good Peoples.
Thursday saw a Next-to-Last Stand by the Horse Barons and a small contingent of the Children of the Forest (quickly renamed the Dumpster Panda Brigade) led by a Stone Titan.
The Forces of Darkness went first. I say "went first" because "move first" would be wrong. Only a few green skins on the Evil Left moved. Borak the Despoiler and his Chaos Legions must have stopped to make a sacrifice to their dark masters, while Kronos the Undying must have been building his necronic powers to move his undead troops.
When it came time for the Good Guys to move, they did with gusto, surging forward to defend their lands. 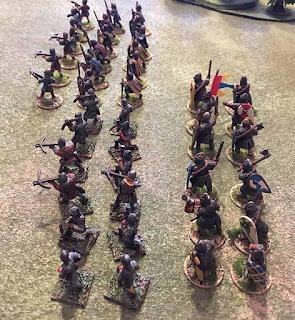 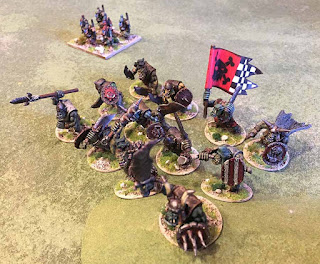 It's here where some of the troops with a history in this game fall back to their old habits. In the past, the Ogres just wouldn't move. Same thing. Are the prospects of a good meal not good enough. Borak had recently been replaced by a newer, more imposing miniature. I guess the newness hadn't wore off, because he too had a hard time getting moving.
One thing was different, though. The nameless hill giant that follows the orcs around has a history of getting killed early on, or just wandering off. Not so this time. He relentlessly hurled rocks into the Horse Barons, right flank. More than on unit ran off rather than be squished.
About a half a dozen turns into the fight, the Undead finally got in the game. Kronos unleashed a Deathblow that sent a unit of archers reeling. But when his vaunted Wraiths attacked some lowly foot  soldiers they were not on;y repulsed but quickly dispatched back to the Netherworld. They would return a few turns later, summoned by their Necromancer, only to be struck down again! 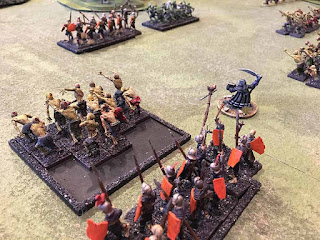 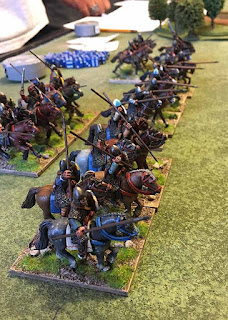 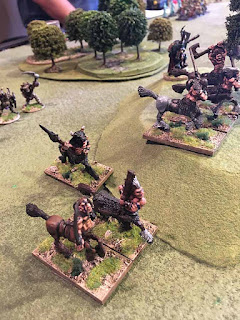 The Stone Titan squished a unit of hobgoblin Prickers so thoroughly, his own allies seemed shocked by it and refused to activate.
Orcs once again had no stomach for a fight and ran off, while despite Borak single handed holding off  all comers, his Chaos minions steadily dwindled. 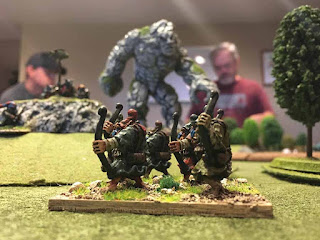 A great victory for the forces of Good, with a great many howls of laughter mixed in.
Posted by BaronVonJ at 12:52 PM

Invested in the March of Death KS.