The Cosmic Junkyard!: A Super Battle 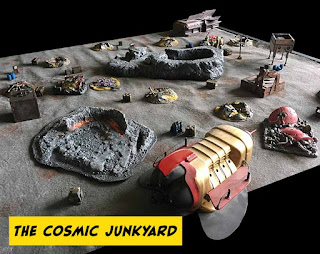 Rumors have surfaced that important components of the Gauntlet of Infinity are hidden amongst the the refuse of the Cosmic Junkyard, guarded by Junkman and his Henchbots. 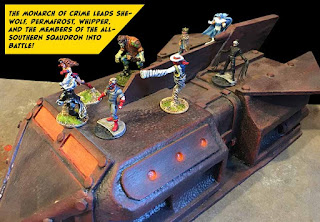 With Emperor Ape exiled in Null Space, leadership of the Crime Sin-dicate falls to the Monarch of Crime. Unable to summon enough members, the Monarch is forced to call upon members of the All Southern Squadron: Whistling' Dixie, Johnny Reb, Texas Twister and Hillbilly. 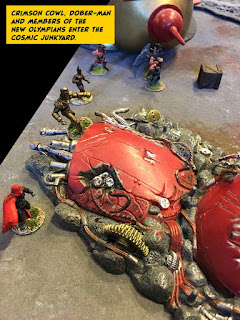 The other side found most of their rank depleted also. With most of the Galant Guardians fighting an Elder God on Island X, the Crimson Cowl  and Goldar, along with Dober-Man had to hitch a ride to the Cosmic Junkyard withe New Olympians: Heracles, Cyclops, Warhawk. 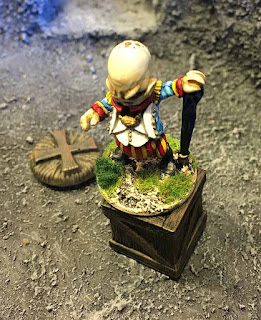 Arriving at the Cosmic Junkyard, a moon covered in discarded tech from a thousand worlds, the heroes find their evil counterparts already digging through the junk.
Sober-Man immediately left into action, only to be pummeled by a tornado punch from Texas Twister. Lucky for him, he can regenerate. 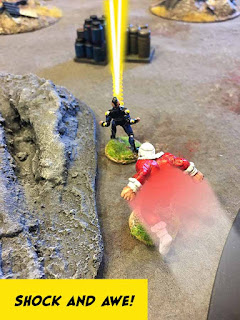 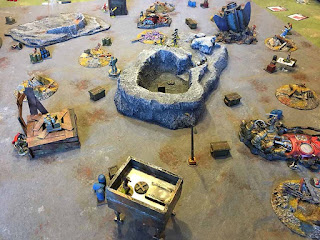 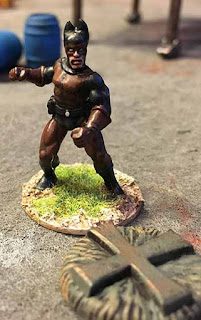 She-wolf, unable to control her berserker rage, made quick work of the Junkman's defense drones. She then turned her attention to the master of the Junk world himself.
Warhawk took to the skies and immediately took fire from multiple baddies. Hellbilly, the undead hulking redneck, got blasted from the powerful Shock. Meanwhile Shock's brother, Awe, bounded across the battlefield grabbing one objective and to tried to grab a second, only to be beat back by Whistlin' Dixie.
Across the junk strewn moon, the battle raged, heroes and villains falling. Soon, the Junkman himself was downed by the relentless onslaught of She-Wolf, Hell Billy and The Monarch. With three of the five objectives in tow, the villains scrambled back to their ship and blasted away.
The heroes, with only two pieces, took stock of their losses. They found a beaten and bruised Junkman in the rubble. In a raspy voice, he told them how they could get their revenge....

Posted by BaronVonJ at 9:30 AM

A very enjoyable read, cool terrain and miniatures too.