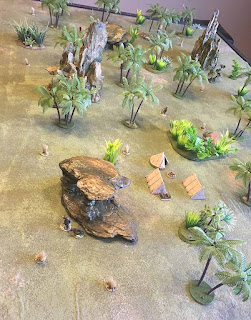 "In the dense rainforests of South America, 6 Leagues descend on the dig site of famed archeologist Lady Elaine Darrow. Each League has their own motives, but all involve the location of the mysterious Perilous island..."
We've played Pulp Alley enough times I felt it was time to start an actual campaign. Each player controlled one of my pre created Leagues:
Pecos Pete and the Giddy Up Gang: Matinee Idols, or Secret Agents in disguise? 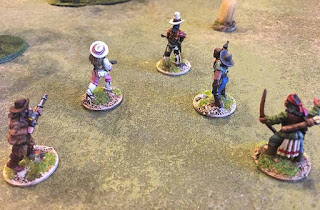 Danger Incorporated: Led by the Dashing Virginia Dare. No job to big, no fee too big. 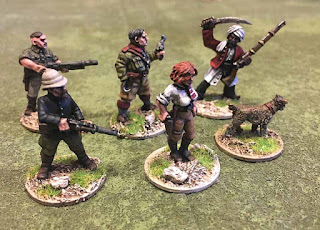 The Royal Society of Archeology and Magical Studies: Led by Connolly and his wife Lady Dora Standpipe
The Nefarious Wu Fang: Mysterious Underworld Leader and his horde of henchmen.
The Iron Legion: Disgraced Noble, leading and army of technological wonders (that seem to break down a lot) 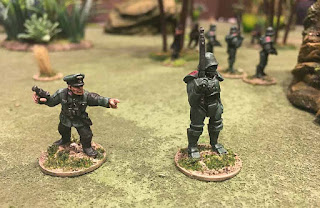 and finally, the Red Raptor: Hero of the Skies. 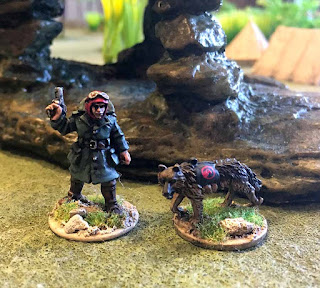 With 6 Leagues and 5 plot Points, it was gonna be a slugfest. With this many players, I find it helpful to have a marker, or Totem if you will, to show who holds the initiative. 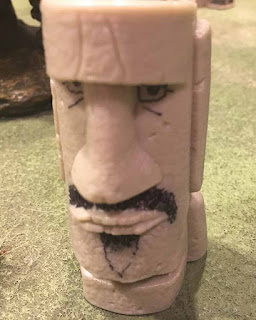 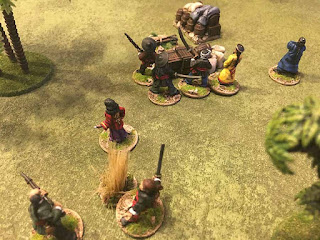 The Royal Society grabbed the Idol, while Pecos Pete raided Darrow's tent (despite those pesky snakes).
And the fourth Plot point, Lady Darrow's maid/body guard was "persuaded" by Virginia Dare to join their cause.
All the while, of course, bullets and Fortune Cards were flying. Followers dropped like flies, Allies tussled with each other until turn 4 when mysterious explosions rocked the dig site.
Ace, faithful dog sidekick to the Red Raptor (a holy terror as some have come to know him) stalked the jungle taking out League members left and right. 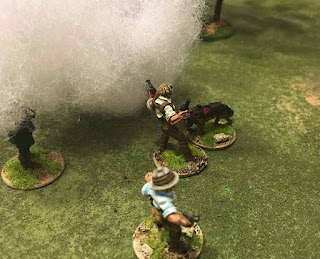 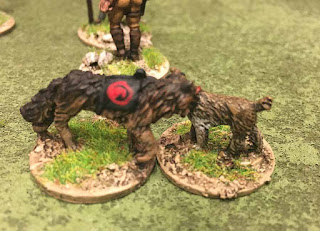 Quite the scuffle start around the final, and most important Plot Point, Lady Darrow herself. It finally took the persuasion of Dare and Darrow's bodyguard to win her over.
Night was falling or the dig site turned battlefield, and the Leagues disappeared into dark, plotting their next move in Chapter II.

Posted by BaronVonJ at 9:11 AM