IHMN stands for "In Her Majesty's Name", a great set of VSF rules. I was/am a fan of predecessor of these "In the Emperor's Name" which I have already used for Fantasy.
Last week we tried using Pulp Alley to find the perfect set of Fantasy Skirmish rules, this round was IHMN. PA was fun and had the perfect mechanism for traps and dangers I wanted. But, with 6-8 players I needed to speed things up even more.
The scenario involved the Barbarians trying to get a "dark gift" to the Lord of Evershade Valley across the battlefield. The Orcs and Chaos dwarves were sent to help them. The forces of Good had to try and stop them 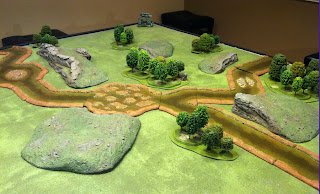 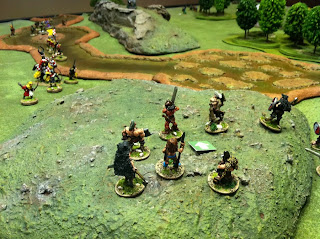 Barbarians race to the crest of a hill. 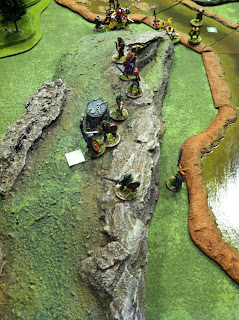 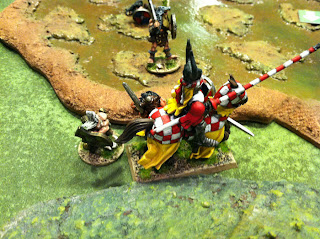 Sir Leon is swarmed by heathens! 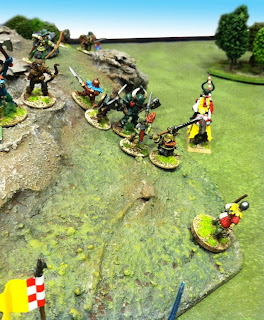 In the original IHMN rules player alternate moving and shooting miniatures. With 6 players I speeded things up. Each player was dealt 3 cards. They had to choose one to use as there Movement turn, one as Shooting, and one as Fighting. This sped things up mightily and with trying created thing like opportunity fire.
The Barbarians, unencumbered by armor, ran across the battlefield and delivered their gift, thus winning the game for evil. All in all, worth another try.
Last night's pairing was an easy one.

I tbought it worked well. We should be able to use this basic system for science fiction, fantasy and steampunk.

Hi Baron,
Would you care to give a little more detail on that card mechanic. I'm always fascinated when players adapt the rules to suit their own tastes and situations.
Cheers,
Craig.

Het Craig,
I think I mentioned awhile back on LAF. I think IHMN works great 1 v 1, but really tough when you have 6-8 players every week like I do. Every player was dealt 3 regular playing cards. They decided what phase to use them in: Movement, Shooting or Fighting. So I'd say "Movement, and they would all turn over one of their cards and execute all the moves for their warband in order of highest to lowest. (I think I'll allow aces to wait and see allowing interrupts). After all moves, Shooting eas done the same way, etc. Having shooting come first allowed some archers to pop off a few shots before the barbarians who closed with them during Movement. There was talk of dealing more cards based on better leadership or speel, giving p;ayers more tactical decisions. Worked great.
BTW I will soon be unemployed and looking forward to spending more time designing games and any help or networking with you would be appreciated.

That was fun. Nice figs and stiff booze.

I liked it and thought the 3 card system worked well. The mechanics were clean for the overall combat system. Checking Grit for morale or death was very simple. As Lead Addict said; 6 players completed a game in 2.5 hours with lots of laughter. A very good night.