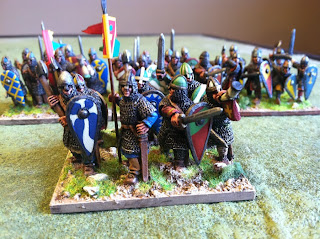 The Baroness took a much deserved grand tour of the Kingdom this past Saturday which left me some time to paint and try out some games I've been wanting to try for awhile. I enjoy my problem of 6-8 regular players, but it doesn't allow for those smaller 1 v 1 games. So, with the help of Essjam, I tried Dux Bellorum and Richard III.

The Normans and their LPs
I gave a one read thru review a while back. The Early Dark ages or time of historic Arthur, has always been a favorite of mine. I've had, over the years several rule sets, but none felt quite right. Glutter of Ravens came close but still wasn't right for me. When I read Dux Bellorum was a refined version of Glutter, I knew the $12 purchase was worth it. 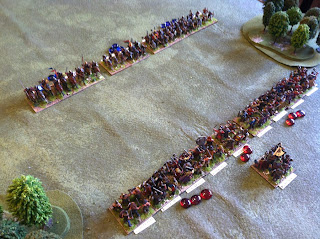 The forces face off. LPs have been assigned.
I don't actually have any Romano-Brit troops, so I pushed the limits of the rules to a Norman v Viking contest. You build forces using a small but effective troop list. Horses aren't very prevalent for the DB period, so a Norman force cost a lot, only giving me 10 stands of troops. In DB, a stand is a unit of around 50-ish men. It also uses basewidths as measurement. My 60mm x 60mm bases with 6-8 men looked just right. This isn't a army we're talking about, but a warband of a local warlord. 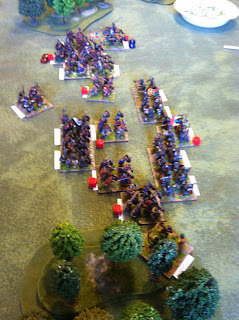 Red dice indicate Cohesion loss. Long term I would definitely use markers to limit battlefield clutter.
You purchase Leadership points for your forces. For this test, both sides got 8. LPs are the heart of the system and add tons of tactical depth, I'm sure me and my opponent only began to understand with our one play.
LPs are used to help move your troops, strengthen their attacks, reduce casualties, pre-empt movement, and bolster morale. You've only got so many each turn, and lots of troops. You lose LPs everytime you take losses. How to use them becomes the heart of the game.
The Vikings were the Aggressors. A normal game turn is: Place LPs, Simultaneous shooting, then move and fight. 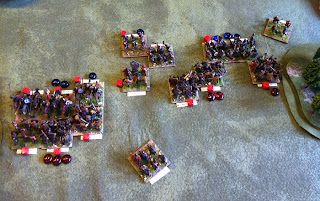 The battle breaks up. I also used tags to list stats on each base. This isn't necessary in a real game, but thought it would save looking up stuff this first game.
Moves are further broken down to: Skirmishers first, Mounted second then your foot troops, with Aggressors always going first. My all foot Vikings limited my options to the end.
The game started with the Normans getting a pesky skirmish unit in the woods to my flank. Shooting has a hard time killing off units, but it can definitely weaken them. My troops were a mix of highly trained shieldwall (ok attack but tough on defense) and warriors (great on attack, not so much on defense and penchant for uncontrolled charges). The Warriors uncontrolled charges allowed me to attack without having to worry about Bravery Tests, which have to made to move troops around. Once the Normans got close, I just set them loose.
The fighting part became what Dark Age battles are, a shoving match. Terrain limited the abilities of the Norman horse to get around my flank, but they were tough and ended up breaking the flank they hit after 3-4 turns.
It was close. We finished within a few stands of each other with the Normans eeking out a victory. It took but an hour to play.
Can't wait to try these as a campaign. Speaking of which, yes I have read Dux Britainiarium. Like most of the Lardies rules, I liked the ideas presented, but found the actual play clunky and not to my taste. That being said, the campaign system could be lifted and use the combat from Bellorum. 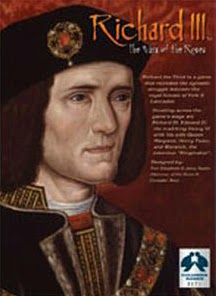 We then played Richard III. I have a large Wars of the Roses collection, so a Columbia Games block game about the period was right down my alley.
I played the Lancastrians and Scott the invading forces of York. There are 3 game turns, each split into 7 sub turns. By end of round 2 I was dethroned and playing the Usurper, and in the end lost by 2 points. Again, a great game with lots of depth I barely scratched.
And on a final note, "Hey we made 200 Followers!" Welcome to the new guys and tahnks to the old, for sticking around.
Posted by BaronVonJ at 8:05 AM

I have those rules. They looked pretty good. I spent Saturday afternoon doing Christmas shopping with my wife. I think you got the better deal. :)