With the delivery of a pile of Dwarven Forge dungeon tiles, it was time start messing with rules. Pulp Alley is a favorite of mine. The rules are tight and designed for small groups or Leagues, why not warbands?
I built them using standard rules. Worked great!
The scenario: The Dark Lord has slumbered in the Broken Valley for centuries, locked in a tomb by a powerful spell. Now, the forces of Evil have come to set him free, hoping to curry his favor by freeing him. Meanwhile, the Forces of Good have come to destroy the tomb once and for all. 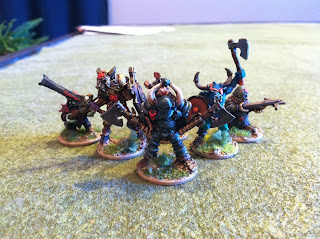 Drax the Despoiler and his Chaos Crew 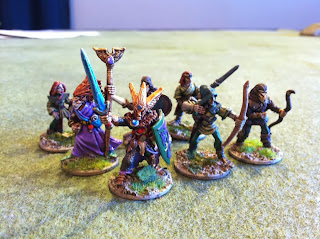 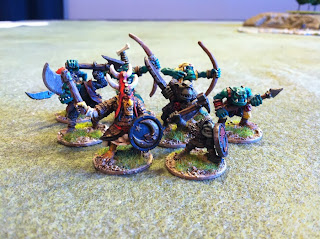 Gort the Cruel and his greenskin warband 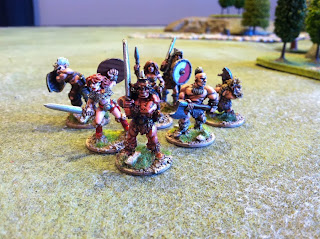 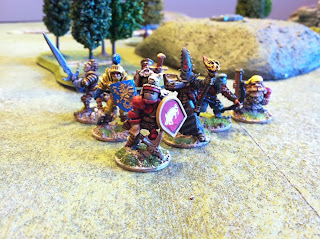 An adventuring band led by Sir Barnstable
There were 4 minor Plot Points. One had to be captured before the Tomb could be opened. 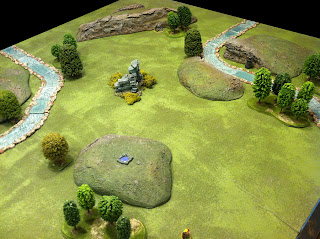 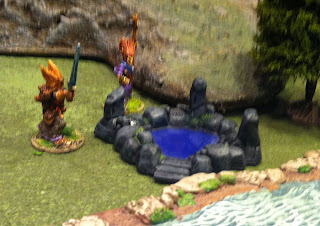 The Elves are first to capture a plot point. 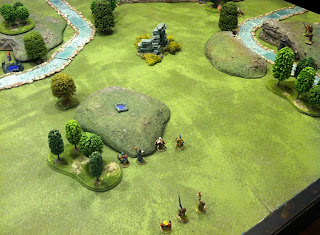 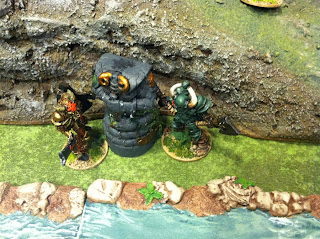 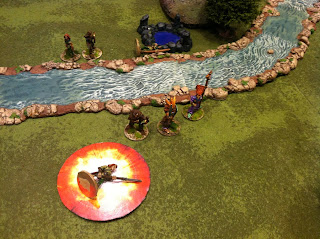 An elf is caught in fireball from the Adventurer's Wizard 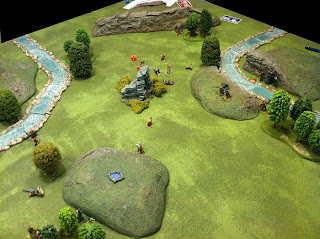 Forces converge on the tomb 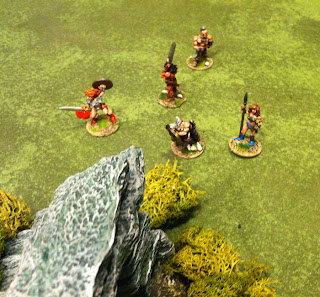 Are the barbarians fighting for good or evil? A clash of Leaders outside the tomb.
In the end, the forces of Good, led by Elves manage to destroy the tomb of the Dark One, sealing him forever in the Other Realm.
A good time. The rules work great as a Fantasy Warband game. I could see them working even better in a dungeon setting, using Fortune cards to trigger traps, etc. Make some wandering monsters and BOOM!, perfect dungeon crawl.
We'll also be trying some other rules but for now I liked how they worked.
On another note you may notice a break in the action here at the Baron's Blog. I was recently laid off from my job of 20+ years. As you can imagine this is a time of uncertainty and worry for me and mine, so gaming and painting may take a back seat for awhile. This, however, may turn into an opportunity too. A chance to dive deeper into a hobby I love. I've always wanted to start my own gaming company....

Posted by BaronVonJ at 7:35 AM

I've been looking for a similar kind of ruleset and may have to give this a try. Sorry about the job!

Sorry about your job news. What do you do?

In the silver lining department, your adaptation of a Pulp game to fantasy warbands is brilliant. May have to order up a copy of Pulp Action for myself.

great to see such classic minis getting new game action. I've played Pulp Action once and thought it was a fun rule set, adapting to fantasy is a good idea.

I'm sorry to hear about your employment situation. But, maybe you will find a silver lining... We are cheering you on, if from a distance.

I've been looking at purchasing Pulp Alley, and this gives me one more reason to buy it.

Very nice looking game, you have me intrigued. Bummer about the job, but you cerrtainly have thee talent and experience to do something cool in the gaming biz. Perhaps an opportunity?

Oh wow, sorry to read out the layoff. I would love to see some gaming material from you though, so keep us posted if you do spend some time producing things.

Great read, thanks for sharing.