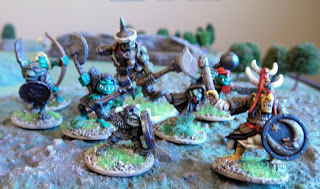 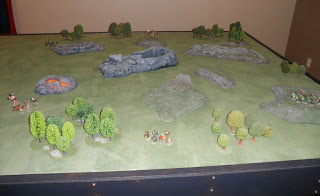 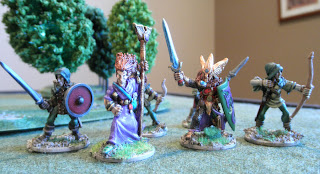 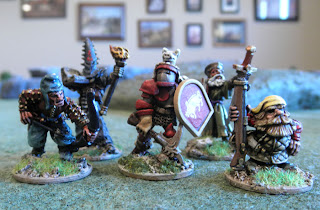 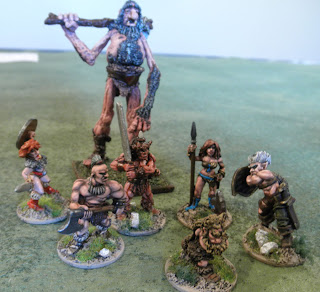 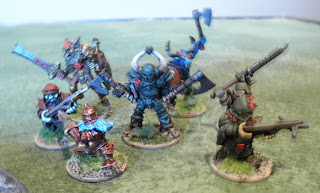 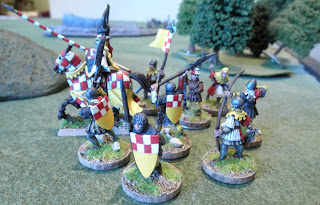 The King's Men
The forces weren't balanced point-wise. But tactics should have panned out. They didn't. It was mostly a one sided affair in favor of Chaos. The Boy, controlling the Adventurers, got hammered by the Barbarians second turn. He never even got off a spell. (Spells are basically Psyker Abilities from ITEN). The forces of Good should have hauled ass to the temple, and then defended it's narrow passage. Chaos warriors are slow, the Barbarians have no long range, and the orcs were farthest away and blocked by terrain. Oh well. It was still fun.
Posted by BaronVonJ at 8:39 AM

Cool! I wondered if ITEN would work for fantasy as well. I'm not a big fan of the 40k universe either, I don't know if it's just old age or what but it has the feeling of being written by teen metal heads in the 80's.

I like bits of it but not the whole universe as a whole.

sorry I missed it. Looks fun. Was it faster than song of blades?

As for 40k Universe. Suspend all disbelief, forget economics, politics, and basic social requirements for a civiliazation to survive, and you can enjoy it. I do for the pure wonkiness of it. And some of the figs are simply terrific(while they have a whole bunch of terrible stuff too).