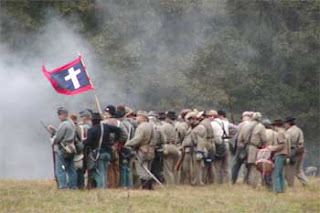 Besides Virginia, Missouri was the most fought over state during the Civil War. And a lot of those battles were fought very close to my home town of Independence. Of particular interest to me is the First Battle of Independence, which will have it's 150th anniversary August 11th, 2012.
Enough time for planning a tabletop reenactment?
During the summer of 1862, many Confederate and Missouri State Guard recruiters were dispatched northward from Arkansas into Missouri to replenish the depleted ranks of Trans-Mississippi forces.
Various guerrillas and bushwhackers, most notably those under William Quantrill, had gathered in Missouri and assisted these recruiters as they worked in the region. For example, Upton Hays was aided by thirty men from Quantrill's command under the brutal George Todd. By August 1, Hays was camped near Lee's Summit with 150 men. Additional Confederates continued to infiltrate the area throughout the days that followed.
Union forces, meanwhile, were bivouacked in Independence, the county seat of Jackson County. These were led by Lt. Col. James T. Buel. Like many towns in that part of Missouri, Independence had a number of sympathizers from both sides residing in it.
Colonel Hughes intended to cross the Missouri River, to recruit around his hometown of Clinton County, Missouri. He and Gideon Thompson rode to Hays's camp with 75 men; 25 additional men with Quantrill soon arrived. The officers conferred. Desperate for ammunition, and needing a victory to stir their recruiting efforts, they determined to make a surprise attack against Buel before he could attack them. Cole Younger and another man conducted a successful reconnaissance of the town on the day prior to the Confederate attack.
Lt. Col. Buel for his part had sent one of his officers, a Captain Breckenridge, scouting for eleven days, but Breckenridge found nothing. Buel became aware of Hays's camp, however, and prepared to attack it. On the evening of August 10, several citizens warned Buel of an impending assault on the city; many Union residents had already fled. Buel ignored these warnings, but another of his officers, a Captain Rodewald, did not.
The Federals were positioned in three main concentrations: their camp near a rock wall, the bank serving as Buel's headquarters, and the county jail.

Col. John T. Hughes’s Confederate force, including the partisan leader William Quantrill, attacked Independence before dawn, in two columns using different roads. They drove through the town to the Union Army camp, delivering a deadly volley to the sleeping men. Captain Breckenridge suggested surrender, but Captain Jacob Axline formed the Federal troops behind a rock wall and a nearby ditch while the Confederates rifled through their camp, looking for ammunition. The Rebels made several attacks against Axline's wall, but never succeeded in taking it. Here Colonel Hughes was killed, while Thompson and Hays were wounded.
Lt. Col. Buel attempted to hold out with part of his force in the bank building he used as his headquarters. He was forced to surrender after an adjacent building was set afire. Through a flag of truce, Buel arranged a meeting with the new Confederate commander, Col. Gideon W. Thompson, who had replaced Colonel Hughes, killed earlier. Buel surrendered, and about 150 of his men were paroled; the remainder had escaped, hidden, or been killed.
The battle intrigues me:
1- It's a small enough scale to be doable maybe even in 28mm:
USA Lt. Col. James T. Buel


CSA Col./Acting Brigadier John T. Hughes
2- All the colorful characters. Being a direct descendant of one of Quantrill's Raiders, I look forward to gaming so close to my heart.
What I need:
- Maps and terrain. Luckily, a lot of the buildings are still there (including the jail) 5 minutes away from my house. I just need to take a couple of picks. 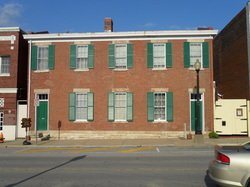 the jail
- Minis. The Regulars are easy enough to find, the militia and Bushwackers are tougher. Foundry claims to make some guerilla types but they're wrong, wrong. They sculpted them with carbines. Being an exclusively hit and run mounted force, they shunned having to reload after each shot, and so usually carried anywhere from 4 to 8 pistols. Great-great grandaddy carried 6.
This will be one of the few times I've set a wargaming goal for myself. Hope I don't blow it. 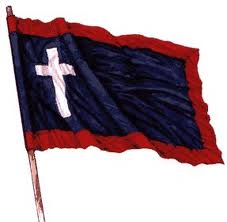 MIssouri Battle Flag
Posted by BaronVonJ at 10:51 AM

Perfect plan - the only problem I could foresee would be 'project creep' where one would go beyond the original scope.

And yes, the lesser battles of the ACW are much more interesting!

Don't think that will be a problem. In fact, this will be good starting point. I can build up later to larger skirmishes/battles.

In case you are not familiar with them, the WHITEWASH CITY paper buildings are great . . . and you can almost certainly get all of the buildings that you need from them (they even come with floor plans):

Thanks for the shout out to White Was City. I've talked with Eric a lot. He gave Fistful of Lead a great review a while back.
I've scratch built my entire western town. And, like I said, the real buildings are right down the street. I can make them easy.

Interesting project ahead- I look forward to hearing more...

have you decided on the rules set?

with that decision then the scaling and minis numbers get organized easily and you can then get a list of what must be done - painted built etc. With a visual list then you can plan your time.

Having done the bicentennial Napoleonic battles of Austerlitz, Auerstadt, Eylau and Friedland recently I can definitely say that having a written out detailed plan and list for the battles needs is a solid way to go.

BRAVO! on setting the plan - one so close to HOME!

With this few forces I could do anything from company size down. The battle is really three separate skirmishes hsppening simultaneously, so I could almost represent three separate tales.
The other fun part could be the mechanics of surprise, too.