Drums and Shakos for 9 players... 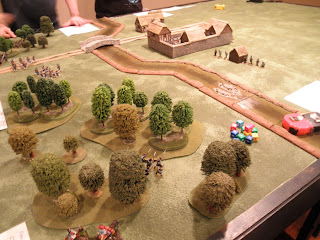 Here's the dilemma: I have a large group that comes over every Thursday. I have a nice 6 x 8 table. So most of my games need to almost be convention style, and playable under 3 hours, cause some of the guys drive a little ways.
This limits, sometimes, the games we play to mostly large scale skirmish. I really like the the "Song of Blades and Heroes" game mechanics, but they're really made for one on one games.
So, I guess it was inevitable that this game Song of DRums and Shakos wasn't going to work.
We had 9 commands. Four British, defending a fortified farmhouse against 5 French units. The game looked great, and actually played well if we had 6 hours.
I'd like to try the whole thing again with something simple like GASLIGHT. 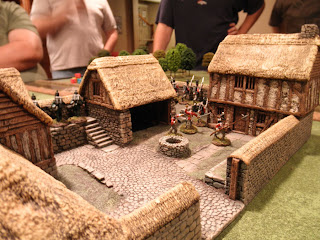 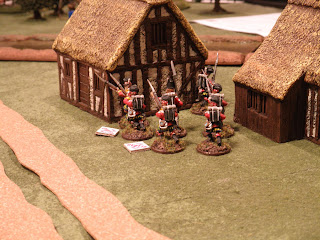 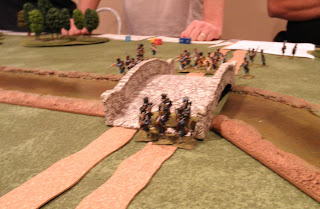 French begin to cross the bridge
Posted by BaronVonJ at 7:20 AM

I haven't played SDS, but I have the normal SBH. It's pretty darn simple. How much simpler is GASLIGHT?

GASLIGHT is made for Victorian Sci Fi, but you cab play w/o those elements. Its pretty darn simple.

Finding games for 6-8 is tough.

Have you tried Savage Worlds? The turn sequencing can handle larger groups and, once familiarised, the system runs pretty smooth.