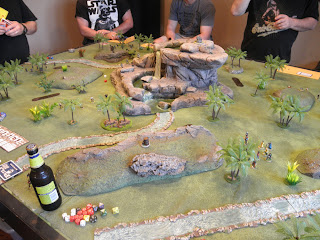 I reran the Pulp Alley Scenario I ran at RECRUITs last month, this time for the Basement Generals. Some things were the same, some different. 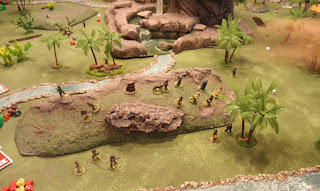 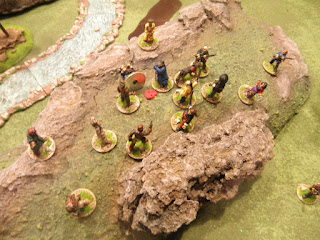 The battle for the gas Plot Point was again brutal. This time it pitted Wu Fang's minions against the Red Raptor (run by the Boy) and his League. Ace, the Raptor's dog sidekick held off most of Wu's endless henchmen while Pappy grabbed the gas. 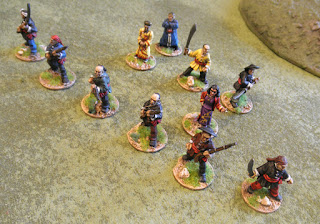 The Gray Ghost lost a few of his followers to gunfire from the Royal Society, while climbing the mountain. 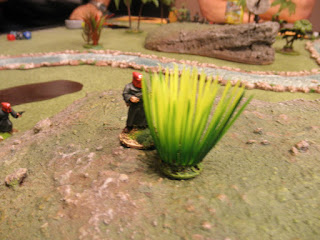 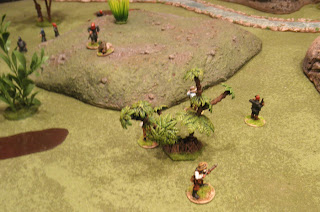 The Cultists of Chimera spent most of the game cowering in cover. Skulking types for ya.
And as the title says, Little Bear, sidekick to Pecos Pete took what seemed to be buckets of bullets thrown his way by the Iron Legion's robot soldiers. Little Bear managed not only to survive the constant fire but put a few bots in the dirt with his bow.
It was hard to get an 8 player game in, in 2 1/2 hours so I called it. Got lots of compliments on how fun the game was. I'll probably do a bimonthly game with the players keeping teams and letting them build.
Next time: Episode 48: Across the frozen Wastes...
Posted by BaronVonJ at 8:07 AM

That was lots of fun. Look forward to doing that one again.

Looks like fun. I would have gone for the Beer bottle objective.