A lovely night for Maurice 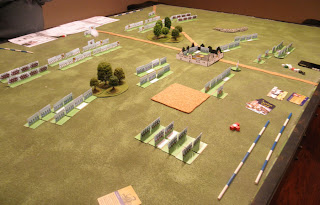 It snowed last night. In May. I mention this because said snow kept most of the Basement Generals home. As I mentioned in an earlier post, I've really been wanting to give Maurice another go, especially run the campaign system with our group. Rather than wait the year it will take those involved to paint armies I went with paper troops to give everyone a feel for the rules and field some troops.
So, rather than getting the whole group together to run through the rules we only had 5. Turns out, that was just right. 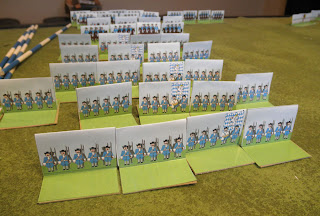 The serried paper ranks
We did the whole she-bang. Drew cards for terrain, scouted for advantage and who the aggressor was, and drew Notables. The only thing we didn't use this time was National Advantages.
Based on scouting rolls, Purple was the Aggressor. Their Notable was particularly good at Rallying troops.
Blue was Defender and got a hothead Notable who likes to charge.
The terrain was Plains. Seven pieces were rolled for and placed. The result was pretty open, but still caused problems for the Aggressors. They had a town to take.
The game moved along really fast. Cards were earned and burned. A cavalry force charged and was repulsed. (Have to wear those infantry down first).
The infantry in the middle annihilated each other. Here's where the "do I volley?" question was learned. A deck was gone through. 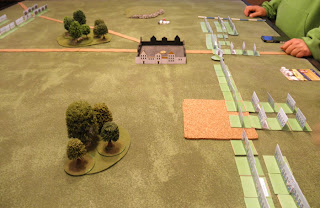 All of the sudden Purple was down to 3 morale points left, and Blue 5. It was late, the weather was getting worse, and we called it.
Love these rules. Can't wait to get some "real" troops on the table. Also has me VERY excited for Longstreet. Until now I have held firm against painting 28mm ACW. But, for how long?
The warring Factions, again based on barnyard animals: 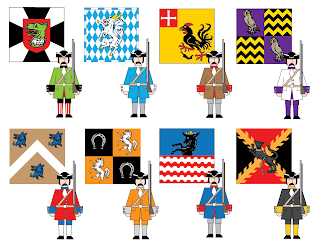 Posted by BaronVonJ at 6:52 AM

Yep, I wussed out because of the weather. It looked it was really fun. Makes me want to do it in 28mm. :)
I guess I better get some 10mm guys and start painting.
I love the flags.

It was fun. Can't wait to see "the Goat" get out there and fight.

And the noble and stubborn Ass!

let me know when an old glory oreder is going in.

Whenever you want. I need cavalry and generals.

Maurice was a blast, the cards really add to the flavor of the game. As the attacker, I really felt the pinch of limited cards as my army finally closed on the town.

I will be interested in an Old Glory order too. Don't have any Marlburian CAV or Arty yet.

Looks like fun. I think going at it with paper armies was a great idea. Might as well find out if your group enjoys the game before all the hard work begins. I still love the banners and uniforms. Excellent stuff.