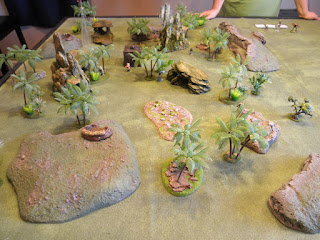 I love Supersystem, particularly version 2, and particularly Golden Age. We've played for years and battles go one of two ways (much as battles do), nail-biters and complete blowouts. This game was the latter of the two, but didn't make it any less fun.
The scenario involved a secret Japanese base on an undisclosed island. The Allied Freedom Force would have to battle past the Japanese Supers to get the secret plans.
The Japanese got set up first and chose an All around defense. Most of the powers for these particular guys were defensive in nature (more about that later). The Allies came in all in one place in hopes to overwhelm. 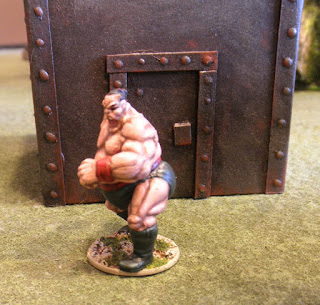 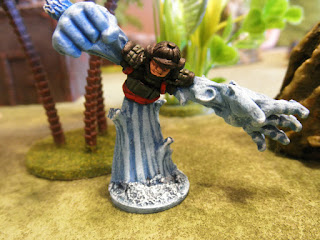 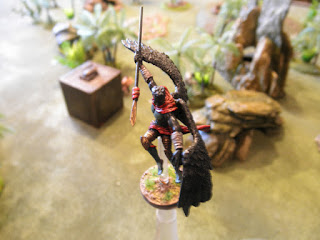 Tengu surveys the skies
It was a slaughter from the get go. With much goading from his peers and questions about his martial spirit, Tengu, the crow warrior flew out to hit Jack-O-Lantern head on. His mystic spear proved ineffective and left him the target of everything on the ground. Soon, there was a mass of burnt feathers littering the ground. 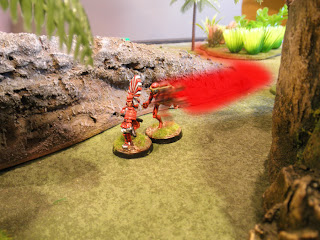 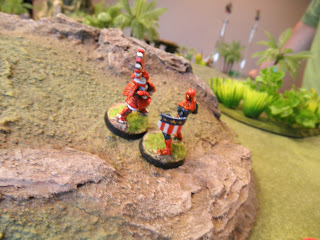 When Hachiman, human embodiment of the Japanese War god, strode forward to fight, first Scarlet Speedster, then the Sentinel leaped forward to hand him a beating.
Before the battle, there was much fear from the Allied side about the Kamikzae bots. They were tough to take down and when detonated, could take out a hero single handed. 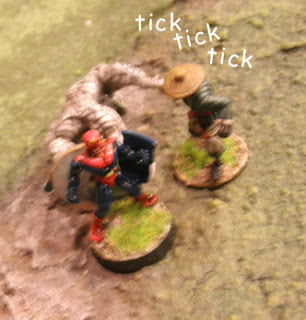 They did not. Bot after bot exploded to little effect. One by the one the Japnese dropped. Tsunami, Rikishi, Oni, one by one. A brutal Allied victory, with no losses. A divine Wind, just blowin' the wrong way.Like I said still fun. 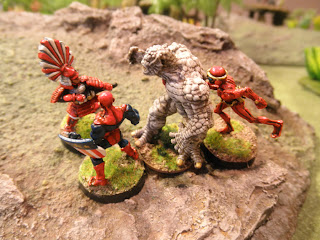 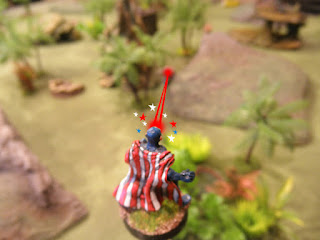 One thing to change. I based the Japanese stats on the figs I painted. They had little in ranged attacks. The suma super alone was designed to take a beating and keep going. But no shooters. So, next time they meet, the Allies will have to face Raiden, master of lightning, a mind flaying geisha, and Rising Sun, solar powered super.
Posted by BaronVonJ at 7:46 AM

It was much much fun. and I won for a change.

Cool idea for a game. I'll be interested to read about the tweaked scenario.

I'm unfamiliar with Supersystem . . . and I'm sure that you aren't referring to Doyle Brunson's poker book . . . so who makes it?