I am very excited for this: 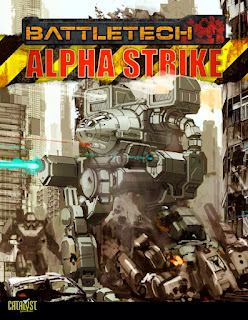 Courtesy Catalyst Games
I started playing Battletech back in Junior High with original boxed set and its cardboard counters. I loved it, but even then it was hard to play a game any time quickly and with anything more than a couple of mechs. So, I moved on.
Last year, I heard rumblings about the Quick Strike rules for Battletech. They were a hidden gem, locked away in a very pricey and hefty Strategic Operations Handbook released years before. Now, it looks like Catalyst Games has heard the masses and will be releasing the Quickstrike rules as a stand alone called Alpha Strike. Huzzah! To be 14 again.

UPDATE: Screw it! I'm writing my own.
Posted by BaronVonJ at 8:35 AM

What ever happened to the 64 page format? do it simple do it quick. And then provide some supplements.

Maybe they're suffering from DP9-itus?

You've took me back a bit again there Baron, I had that one too...

I'll be interested to see how these turn out. I used to play solo games with a company on each side. They'd take all day. The things that teenagers find fun.