Fistful of Lead Bigger Battles: Night of Rivets and Steam...

...and sometimes no steam. 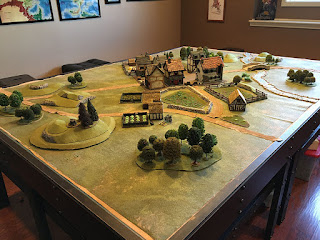 About 6 weeks out from the release of Fistful of Lead: Bigger Battles (yes, that's the newest title). It's all about last minute playtesting. This time getting fresh eyes on some newer aspects like Vehicles, Heroes and Commanders. The last two we tried out a couple of weeks ago with an ACW game between me and my son, but I wanted some of my gaming group who have a more critical eye to take a gander. 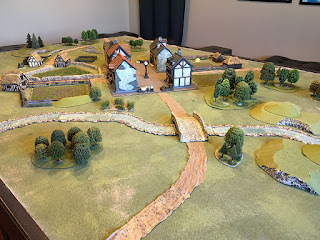 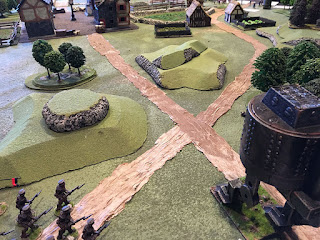 This time, each of the 4 players had a 4 units or 10 miniatures, a small vehicle or mechanical suit, a larger vehicle, a Hero and a Commander. Three objectives on the board. Each turn holding one earned a point. After 8 turns, count up the victory points.
The Allies got the jump and moved the Spider Tank (L'Arachne?) astride the bridge holding one objective. There it would sit most of the game pouring fire into the German-Nightshade troops.
Meanwhile, Prof. Nightshade's (most infamous inventor of his age) patented X-11 Land Monitor wouldn't start. I sat in the corner 90% of the game taking long range pot shots at the Allies. 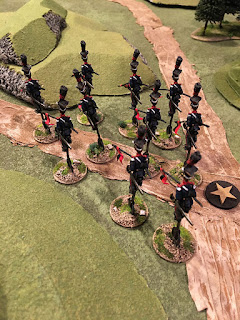 When your cantankerous tanks won't start, send in the unicycle lancers! 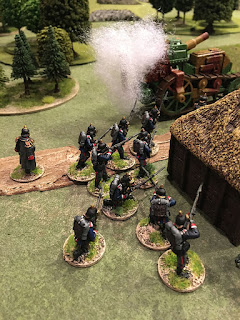 The Luftmarines, fresh off the boat from Venus, move into position aided by an armored steam tractor and the commander, Baron Von Bummtikkler himself. 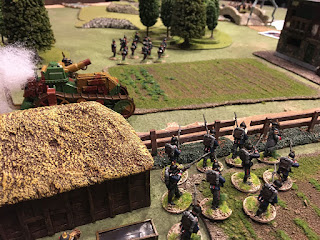 The lancers moved into the town but were stopped cold by the Spider Tank and some pesky Americans. Meanwhile, the Spider's little sister fired rockets and rounds into the Land Monitor and Nightshade's clockwork soldiers. Being "soulless" they ignored any Shock and trudged forward unfazed by the broken remains of their brothers. 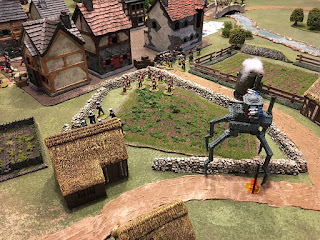 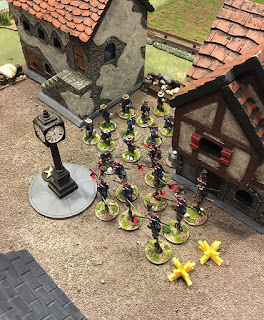 The lancers charge into combat! With 2 Shock, they only fight with 6 of their 8 members. But, being "brawlers" they reroll any misses in Close Combat. They manage to kill 2 Americans and add a Shock marker to them.
Unfortunately, the Americans have George Armstrong Custer (hero of Little Bighorn. He brought steam tanks this time) attached to them. Attached Heroes and Commanders give the units they're attached to any traits they themselves have. In this case the d12s of a Veteran, plus the 3 dice Custer has. Miraculously, the Americans didn't kill any lancers, but did deliver enough Shocks to give the lancers more than they had troops. This triggers a Regroup. 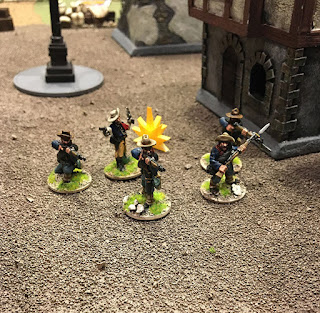 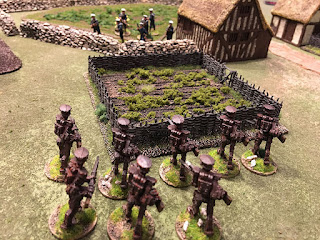 Clockwork soldiers march steadily on. Only the Naval troops stand in their way. 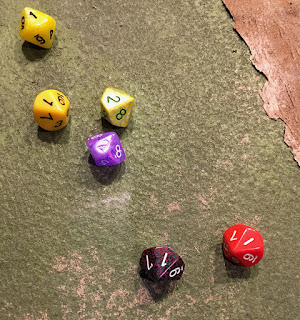 and here's what they rolled....
Any time you roll more 1s than hits in Bigger Battles, something bad happens. In the case of Close Combat, troops get a Shock and fall back. The Sailors fall back under the bayonets of the Clankers.
By turn 6, it was clear the Allies had this one. I had trouble getting my vehicles started and moving, despite having an 80% chance of doing so. The British right wing was almost wiped out by a German squad led by their Bloodthirsty Hero.
A great game. Once again, the correct use of Heroes and Commanders can turn the tide if used at the right moment, but they can be vulnerable too. Two were lost when the units they were attached to ran off or took casualties. Said one of my play testers, "Man, some people are going to hate the Heroes, but I love them". And he was the one getting beaten.
It all felt very cinematic. And that's what I want. Plenty of good rules out there to play large scale skirmish out there, but they don't make me laugh quite as much.

Posted by BaronVonJ at 9:20 AM

What a cracking game..love the terrain and contraptions!

I have taken to letting the machines automatically pass their start/sustain roll for the first turn, or if the start and stay on a road. It helps prevent that stuck at the edge of the table problem.

I have taken to ignoring start/sustain rolls one the first turn or when the machines stay on a road (if it is a big enough road). It helps prevent the stuck on the table edge problem.