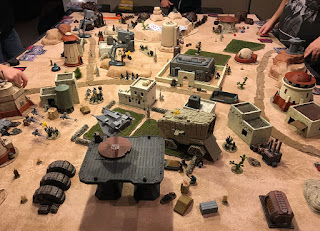 Sometimes you have to push a game to it's limits to see if it breaks (like we tried with 45 spaceships a couple of weeks ago). So last night we packed my 8' x 6' table with miniatures until it was veritably groaning under the weight of terrain and miniatures to play test some more Fistful of Lead: Big Battles. We used Steve's huge Star Wars collection and included a fair number of vehicles, making an exception this time on unpainted minis to get as much as we could for the 6 players.
As a reminder, Big Battles uses the same mechanics as standard FfoL, just switching out single minis for units. In this case, we made units of 5 men, speeder bikes, whatever. Then added in some Heroes, like Jedis and Villains, like Sith Lords as single figure units. We just used the cards for these single from our Galactic Heroes games. 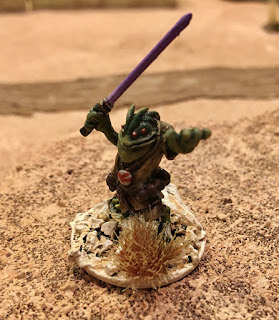 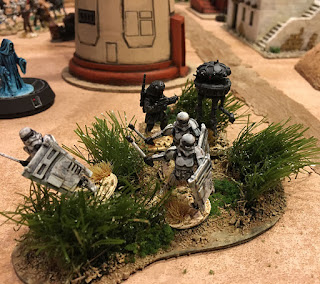 No trees on the table to hide in, so Greg finds the next best thing. 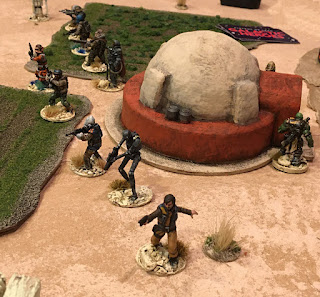 Rebels forces quickly move forward to capture on of the objectives. 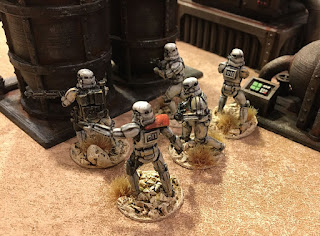 The Imps try to make best use of cover. A Rebel land speeder, outflanked them and poured blaster and missile fire into them. 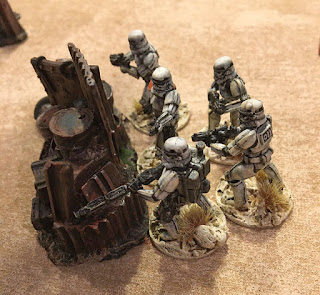 When units shoot, you roll a die (or two in case of this heavy blaster) for each miniature. Shock reduces the number of dice. The above unit would get 6 dice (4 blasters and 2 for the heavy) needed what you always need to hit (5+ at short, 8+ at long). If the unit had 2 Shock, it would only get 4 dice. We tried to keep the mechanics seamless between this game and the others. 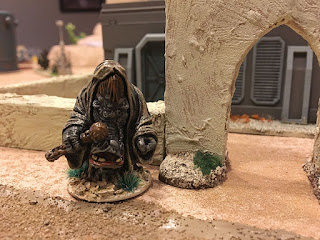 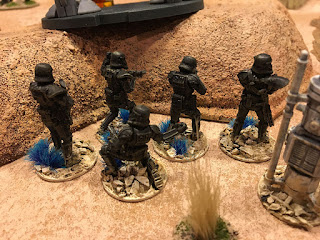 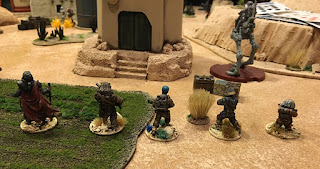 Rebels let the Imps have it! 2 Shock and 2 wounds (figure removal) send the Imps packing. 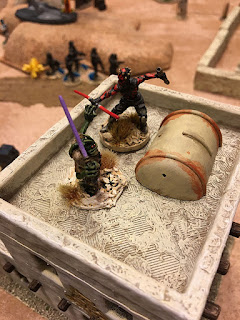 Darth Maul force leaps to the top a building to duel with the Jedi master. Single heroes use their number of wounds as they're dice (in this case each has 3). 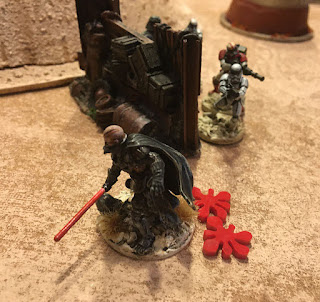 Vader drew a lot of fire. He managed to send most of it back with lightsaber deflections. But he was finally forced to withdraw. When the number of shock is more than the number miniature, or in this case wounds, the unit retreats. 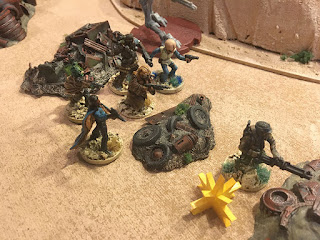 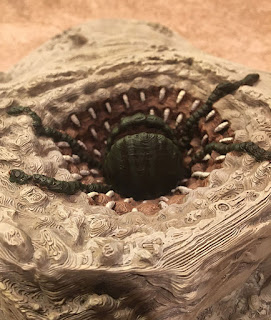 All the noise woke the Sarlacc 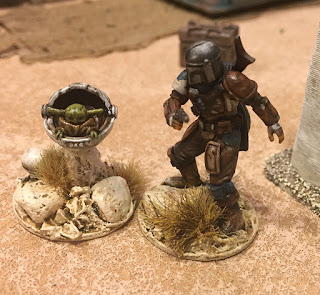 "What's that Baby? I should fire my Disentagrator into that Close Combat?" 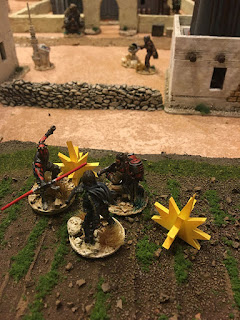 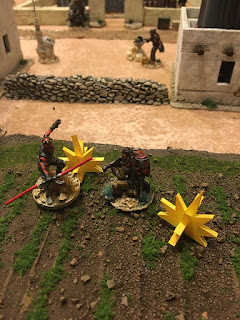 Poof! Bye Jen
The goal for these rules has been to take the game you know and hopefully love, and just play with more stuff! It also has to work for most every period. We done Colonial games, with and without VSF elements, Fantasy and getting ready for a 15mm Samurai game at SALUTE this year. For that, stands of miniatures just replace single figures in a unit.
How do you do it? Once again, it's about how assign traits to miniature, or in this case, unit. We had speeder bikes duking it out (unsuccessfully) with a Rebel Airspeeder, AT-STs stalking about the table reigning fire on the troops below until Rebel missile launchers brought it down. The week before, Trolls and Ogres. I don't think either of the those games felt generic.
Will everyone like these rules. Oh hell no. Button counters and rules lawyers will hate this game, but I firmly believe if you are a Fistful fan, you'll really like these. 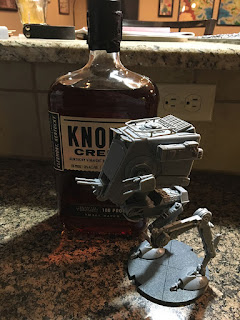 The game fueled by bourbon. Need a big bottle in preparation for the real Big Game. GO CHIEFS!!!

Great looking game. Waiting impatiently for rules to be published.

Very interesting, and a really nice game table and figures.

Thanks for the comments. Patience. Wanna do this right.

"Quantity has a quality all of its own." As true of war gaming as anything else!

Damn, wish I could’ve made that one. Can’t wait to see Steve’s snow speeder painted.

Ok, I'm going to run a Big Battle game at Cincycon in March. This last post made me jump into it. I think I understand most of what you are doing with the Big Battles variant from your posts. I'll ask questions (if that's ok) if I don't quite get something. I am so geeked about this! I have been buying up Imperial speeder bikes, treadbikes and I think I'll print off a few dewbacks too. I'm using Imperial Assault, WOTC figs with a few odds and ends. Have some swoop bikers too.This should be excellent!

Jon: Snooze ya lose.
John: contact me offline with questions.

where are the models from i love skirmish normal legion but can not really afford the tanks thinking of making a mini version :-)

hi where are the minis from?

Miniatures are mix of Legion and Shapeways.