The Grand Campaign: the Battle of Castle Woods

Last night was game 2 of an 11 game Longstreet campaign I am running with my 17-year-old son. In the first game, he brutalized me, but ended up getting punished in the post game. This game was payback... 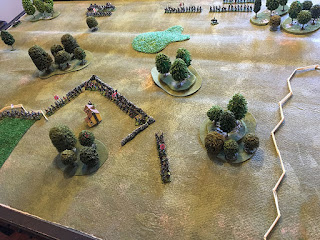 I ended up outscoring him with my Reb cavalry. We randomly rolled the scenarios, which was a defensive battle at a walled farm. Knowing his propensity for ATTACK, I chose to be the defender, even though I would be understrength for 6 turns. 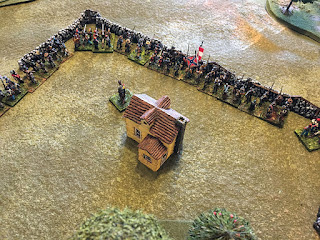 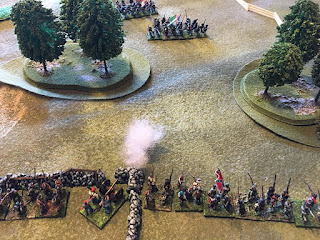 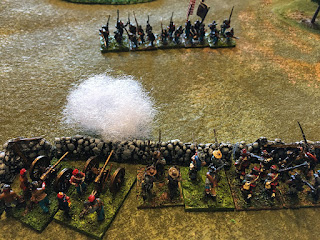 As anticipated, the Union hurled their greater numbers at the rebels. Due to some awesome terrain cards, I had created several choke points the Federal troops would have to pass in between. There I placed the cannons.
It was a bloodbath. The poor Ohio troops were destroyed, while the rest of the Union forces were slowly chewed up before turn 6 even arrived.
We only had a few charges, most of which the Federals won. But, it was too late.
Union lost 17 stands to the CSA 6.
The post battle round saw a Union promotion. The papers must have loved his bravery?
But camp fever slashed through both sides, again decimating the horse. US cavalry dropped to 2 stands.
However, new troops from back East bolstered the ranks once again with fresh meat.

Posted by BaronVonJ at 9:14 AM