A cave full of monsters, a Fistful of Spells 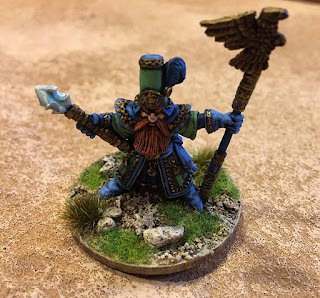 After a chat with some fellow Fistful of Lead enthusiasts about running a fantasy game, I just had to try to put some ideas I've had in cold storage. Namely, using FfoL mechanics for a small, old school fantasy battle in the deep dark...
I stripped down the game for 6 players. No traits. The new weapon types and spell casting would be enough. There would be 3 groups of "good guys", and 3 groups of "baddies". The bad guys would be trying to reach 5 underground shrines and activate them. The good guys had to stop them.
If a Joker is played, it activates a wandering monster, appearing randomly and run by the Gamester. 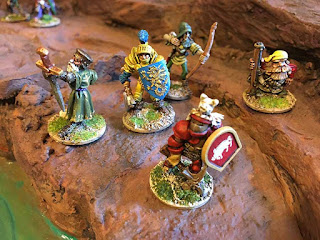 Aelaroth the Eagle and his woodland host 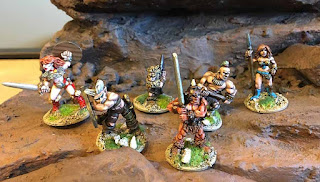 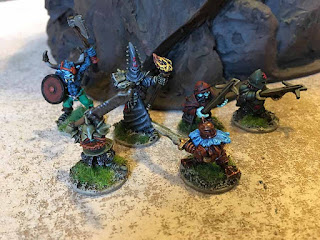 Zoltor the Black and his diminutive minions. 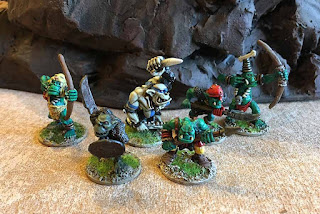 Gurn and the greenskins 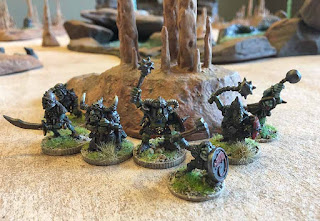 Slurgo the Great and his goblins
As you can see, I tried to use as much ancient lead as possible. I left much of the terrain from last week's Pulp game. 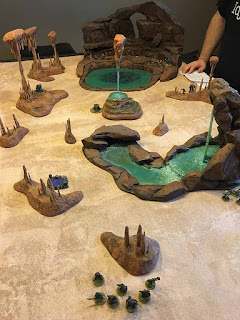 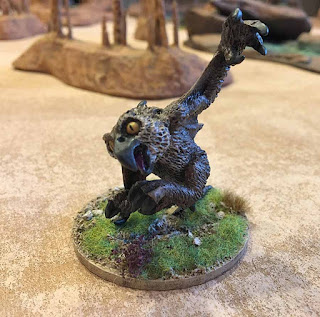 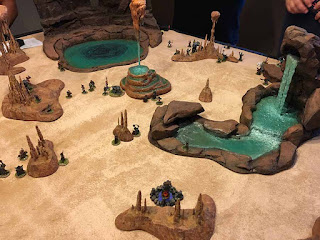 The first random monster attack came from some wolves. They went right at Albazium the Elementalist. He went down with a wound. The next turn he rolled to recover. 1! He bled out before ever casting a spell....
The dark side took it's own losses. Two creatures emerged from the dark behind them. Rather then ignore them, they split their forces to take them on. This left the goblins to take on the elves and barbarians alone.
Unfortunately, Korgoth wielded a Weapon of Legend. This meant a natural roll of 10 or more was an "instal-kill". Let's just say, Korgoth's dice were hot. Many a goblin head littered the cave floor....
Slurgo found himself the target of a "Entangling Vines" spell. His attempt to escape failed and he was pincushioned by elven arrows.
Soon, the orcs found their flank exposed. Fireballs and flames from a young firedrake had them on the run. They were burning while the shrines they had activated were soon being extinguished.
Spells worked great. Most, like Fireball, just use grenade rules. Others do things like remove wounds or shock or create barriers. Each player got a list of 13 tailored spells tied to one of the card suits. If you activated using the right suit, you got a +1 to cast.
Each spell required a certain amount of rest after. The tougher the spell, the longer the rest. It functioned just like an ammo marker. And rolling a "1" meant the spell backfired!
Great bit of fun. 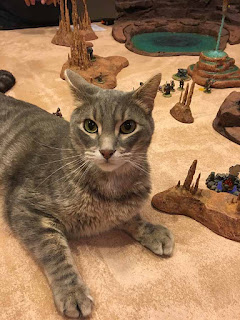 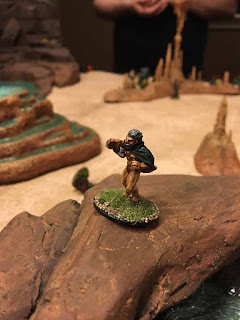 And finally, the Bucknaked Baron (official mascot of the Basement Generals) made an appearance.
Posted by BaronVonJ at 9:08 AM

Sounds like a fun game, looking forward to seeing the Fantasy variations

Awesome stuff. Nice to see the old lead getting pushed around. Once 'polished up' would these rules merit a full release or more a pdf expansion type thing?

After I get Galactic Heroes out the door, the idea is to do a Fistful of Lead core rulebook that covers everything rules have become, then release supplements for each period genre with their own card decks.

Looks brilliant and great fun for multiple players, like all of your "fistful" games!

(and game pics with felines are always good) :)

I backed the Galactic Heroes Kickstarter, and am eagerly awaiting it, but I'd really love to see a fantasy version of this rule set. Hope it comes to fruition.