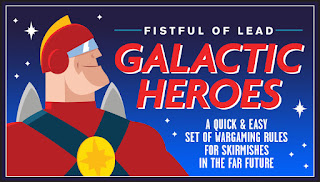 Rocket engines blaze to life. Lasers light up the formless void. Galactic Empires clash. A lone hero rises up to fight for the resistance.

Welcome to the world of Fistful of Lead: Galactic Heroes!

In Galactic Heroes, or GH for short, you’ll take on the role of a Hero or Villain, leading a scruffy pirate crew looking for adventure, or maybe a troop of faceless soldiers of the Empire in search of bringing order to the galaxy. It’s really up to you!

Like all the Fistful of Lead games, you’ll only need 5 or 6 miniatures per player. You can play 1-on-1 games or larger skirmishes with up to 6 or 8 players. This book contains all the information you need to play a game, including rules for building your forces and how to set up the table for different scenarios. Most players will pick up the game mechanics quickly, even people who haven’t played a wargame before.  If you’ve played Fistful of Lead before, a lot of this will be familiar.

Galactic Heroes allows you to play a small scale wargame in the far flung future, a galaxy, far, far away, a grim, dark future 40,000 years from now, or a certain Red Planet where swords and rayguns reign supreme. Whatever YOU think Sci-Fi looks like, from your favorite Space Opera to gritty Pulp epic. 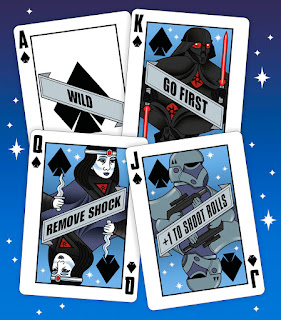 The wait will be over soon. We're shooting for a March 16th launch date for our Kickstarter.
Stayed tuned.... 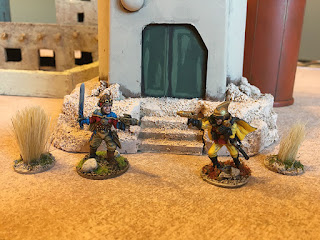 Posted by BaronVonJ at 8:25 AM

Count me in...are you doing a set of cards?

Are you going to Adepticon this year? Would love to see any of the FFoL there.

Baron- you and I both need to hit Adepticon next year- and Salute! We'll go on tour

I'm looking forward to this one.

It's quite a monetary investment, but my wife deserves a trip across the pond.