Some Painting, some gaming 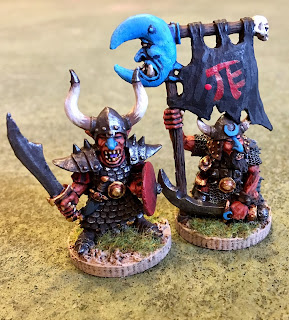 First, some Hobgoblins I painted from a Greenskins war Kickstarter. Sculpted by old-school greenskin god Kev Adams. These fellas are HUGE. Just look at them next to their GW brethren. Guess they'll be "big Hobgobs"? 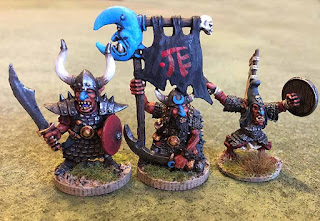 Next is a Drantakh mini I'm painting for a contest at Adepticon. If you're going, stop by Regiment games and vote for me! 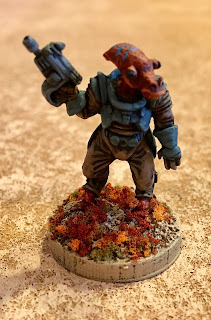 The impending ice storm kept most of the gaming crew at home (it never happened. That's right, I'm calling you out!). The Wastelands Cup stands unclaimed.
The depleted ranks let us try out a Kickstarter game I've been wanting to play: TechNo Bowl. It's got a lot of similarities to Blood Bowl, if Blood Bowl was streamlined and was more like American football. Made to look like an old video game of a similar name, it was a lot of fun. 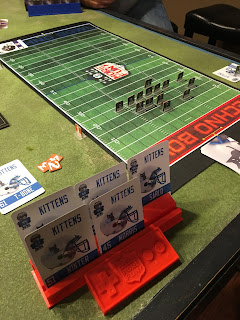 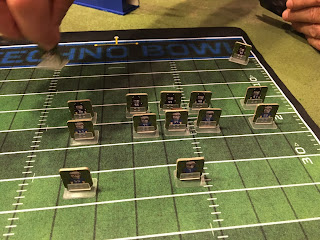 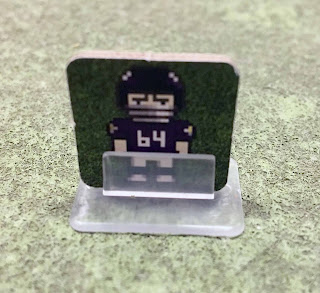 Things are crazy right now. Getting ready for a out of town convention that needs a bunch of minis painted, and will coincide with the launch of our latest Kickstarter. Also have a couple of supplements to finish that would go well for the con too, plus freelance, plus work,....
You get it.
Posted by BaronVonJ at 8:08 AM

Wanna hand deliver? Save me some shipping?

Excellent painting on the gobbos and sci-fi guy! I got some of the Greenskin Wars miniatures, too. Tons of character. Can't go wring with Kev Adams sculpting them.

Love the hobgoblins and alien. Nice paint schemes! Best of luck in the comp!

Are you running any games at Adepticon? I would love to pick your brain over a few things. I will be there with Talon Games in the CAV SO booth. Come find me or I will find you while out there.

Sorry. Not gonna be at Adepticon this year. Not enough denaro for that one. Maybe next year.