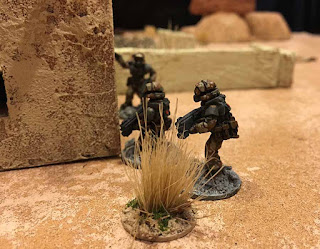 Alliance Troopers move in.
I've been slowly whittling down the last few ideas fir a ScienceFiction version of Fistful of Lead. After all, what are great SF tales but simply Westerns in space? 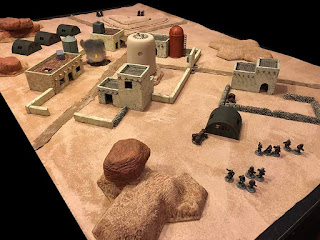 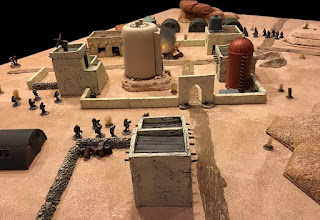 I wanted to try a few new rules last night, and they seem to have worked. We kept this a slightly even affair as far as forces go, except for the addition of the Joker. If the Alliance player used it, they got an orbital strike (giant template), It never happened. If the Rebels played one, they got reinforcements. They ended up with 6 new Rebs for the meat grinder. 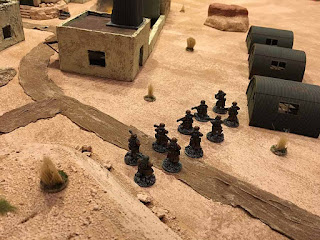 Rebel forces on the move. 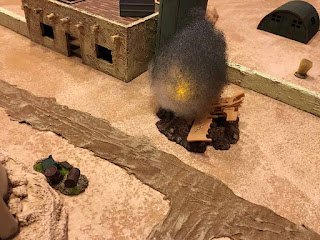 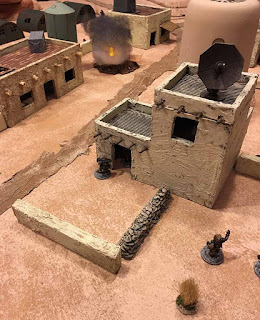 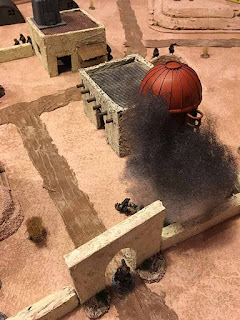 Demo charge fumbled!
The Mission: Rebel forces had managed to down an Alliance courier Drone. Drones like these are used when digital communication has been compromised. The Rebels had to get to it's black box before the Alliance did. Meanwhile, the secondary mission was the supplies scattered around town.
Some really hot dice meant the body count was high. This, along with burst fire and allowing "Pins" to stack, meant that troops in the open tended to get hammered. 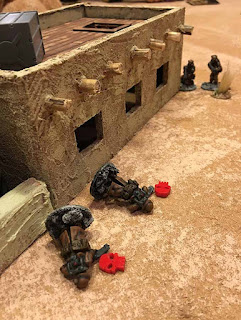 The effects of burst fire! A figure with an auto fire weapon can use a "Burst" at close range. It uses a 3" template, but figures under it are hit at a -1 to Shoot. This automatically put the shooter "Out of Ammo". 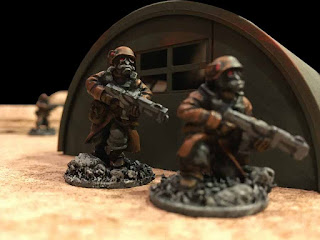 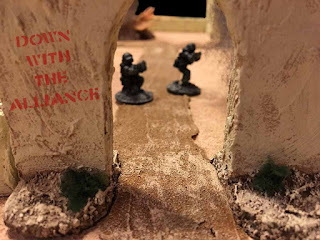 Alliance Commandos clear the Outpost.
The Rebs got to the drone first, but two went down to Alliance fire before the black box was seized. Get the box required two actions and a die roll of 5+ to do.
Meanwhile the first attempt to blow up the supplies by the Alliance resulted in an Alliance trooper being blown up by own charges (he rolled double 1s).
It was great game. I got lots of notes.
The Rebels lost 21! troopers to the Alliance's 9. They have plenty more.
Next week we'll add in some more stuff like armor and special Traits.
Posted by BaronVonJ at 8:23 AM

For templates are you sticking with the GW sizes? 3", 5" & 7"teardrop/flamer?

Those are reasonably ubiquitous and more durable than card-stock cut-outs.

Looking forward to this, although I did receive the new 40k for Xmas...

For the most part yes. I'll probably have laser cut templates as part of the kickstarter.

Sounds interesting! I'd love to read more writeups as this develops.

Do you think that the orbital strike is balanced against getting 6 new troops? Fluff wise it sounds awesome, game wise I wonder if 6 guaranteed bodies is equal to a hit anywhere pie plate.

Sounds worse than it was. Template isn’t auto-hits.

I was thinking the other way actually (i.e. strike is weaker as there is the chance of failure)....i'd be surprised if the strike would ever take out 6. But maybe the benefit of having a strike now is better than 6 bodies that need to jog into position...

I'm keen on giving these a try with all my Ratnick sci fi minis!