A Night of Knights 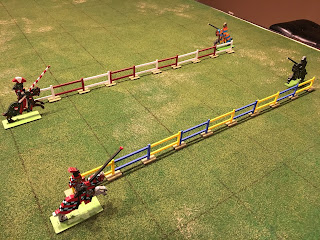 I am fortunate enough to know Thomas Foss of Skull and Crown fame. This has giving me the chance to playlets some of his games before the hit the streets. I also get lots of free toys. He has been tinkering with a Jousting game called Breaking Lances, and last night our group gave it a whirl. 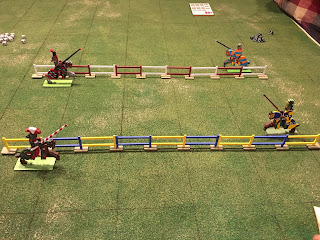 Thomas's site has more of a in depth play through, but in a nutshell, each player controls a knight hurtling down the lists at each other. Each move along the list (using the fence posts as a guide for movement) you secretly plot how fast, where you're aiming your lance, and what you're defending on your own body.
You then reveal and are awarded dice for aiming where your opponent didn't defend, or vice versa.
Yes, it's kinda rock, paper, scissors, but there is some strategy to it.
Finally, you cross lances and use all those die you've collected to decide what happens and score point over 3 runs.
We had 5 players and did a small tournament where each player jousted each other once. We then decided the winner by the most wins. 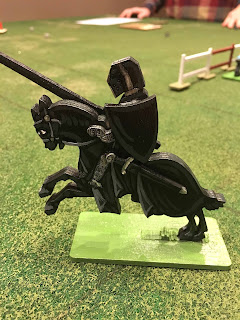 It was quite a bit of fun. Everyone picked it up quickly and this a great convention game. I played the mysterious Black Knight. He was terrible. Didn't come in last, but he got beat up bad.
The winner was Sir Scovil of Pepperton. 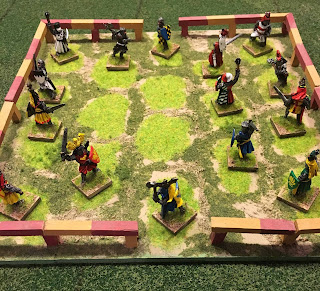 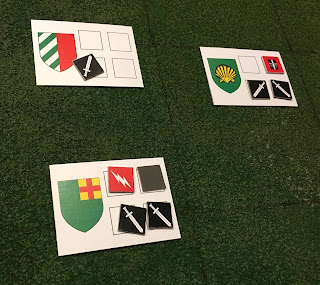 We then moved the action to the Melee. It's a game of my own design using some mechanisms from a gladiator game. We each had a group of 3 knights in the fight, Each knight has 4 "skills" that also count as hit points. As you take hits, you have to decide which skills to loose as your knight gets battered. Do I drop the shield and give up defense in order to keep my ability to strike first, or lose an attack die? Decisions, decisions....
Sir Scovil once again walloped everyone to claim Champion of the Joust. Huzzah!
Posted by BaronVonJ at 8:02 AM

Looking Brilliant- and thanks for playing. I love what you did with the jousting runs- I'm gonna repaint mine.

Have to add the mini-shields.

I really enjoyed the Breaking Lances rules. Easy to learn and a very fast play. Will be a terrific Con game. Well done Thomas (Foss1066)

Thanks Essjam! Now you all have to keep playing and level up your knights. Don't forget ransom.
Cheers
Ths

Silly Rabbit, we never play the same game back to back.