Pulp Alley: Into the Caverns of Consternation! 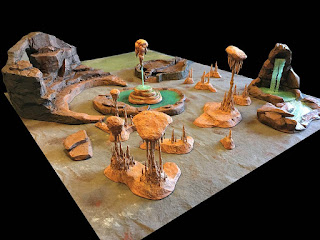 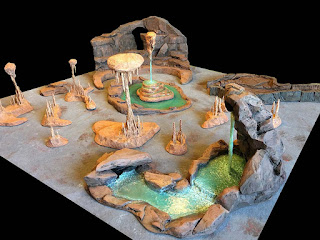 Four brave Leagues entered the Caverns of Consternation from four different openings far below the jungles of Borneo. Each was led there by their own clues, each seeking the Lost Totem of the Dragon Lord, said to be a key to the Underworld. 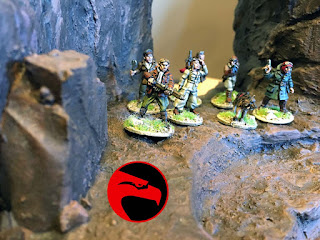 The Red Raptor, hero of the skies, and his Sky Hunters entered from the vine-shrouded cave mouth where the Raptor's faithful dog Ace immediately found a hidden clue. His dug up a strange bone. Not human, and not reptile, but something in between.... 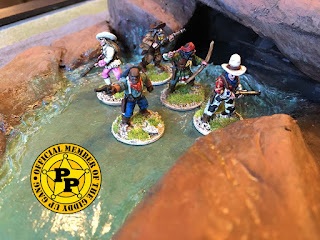 Meanwhile, across the cave, Pecos Pete and the Giddy Up Gang emerged from and underground river.When Black Bob tried to dig a clue encased in a stalagmite, he was attacked by subterranean cave scorpions. 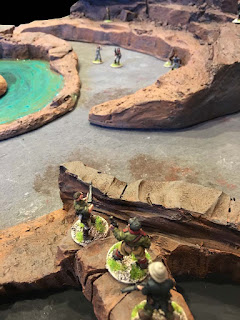 It was then that Virginia Dare, heiress and owner of Danger, Inc. emerged from a maze like side tunnel. They were immediately caught in a crossfire from the Sky Hunters and the Giddy Up Gang. Virginia's poor dog, Wellington, and a helpful Native Guide went out of action. Where's your honor Raptor?! 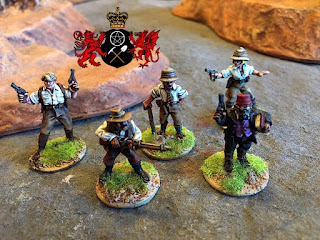 Taking advantage of the chaos, the Royal Magic and Archeology Society quickly snatched a clue from under a heavy rock. Professor Standpipe found the remains of an earlier explorer. The squashed skeleton was pointing at the great waterfall at the center of the cavern. 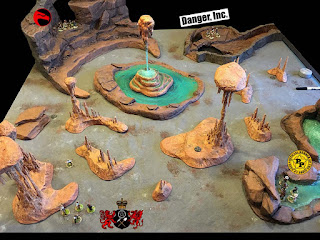 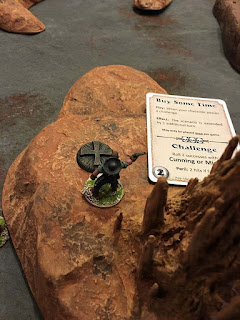 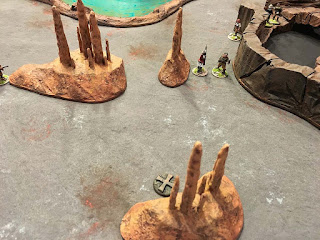 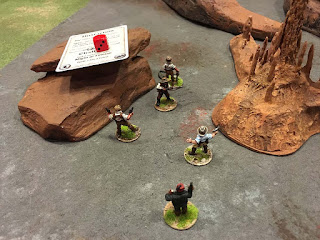 The Caverns were soon full of the stench of cordite and the loud reports of gunfire. Several of the Royal Society were attacked by albino blind cave snakes while trying to get to the waterfall, but the dashing Connelly leapt across the snake filled waters to grab the submerged Totem. 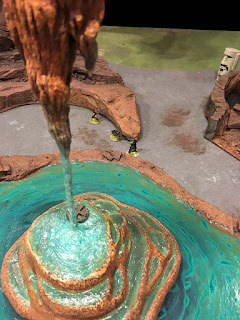 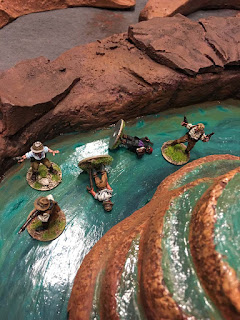 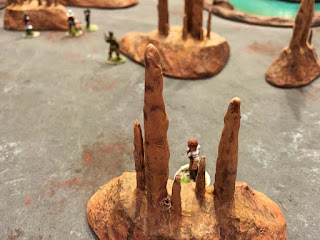 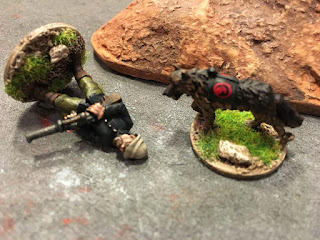 While the Royal Society made good their escape, the other Leagues whittled away at each other. It was only when the Cavern was wracked by tremors that the Leagues gave up and headed back to their respective entry points.
What a great game! I cannot take credit for the terrain in anyway. My buddy Warren over at Ludstuff made it for me years ago, and it finally saw the light of day, or in this case dark of night.
I did paint the Leagues at least.
Even more exciting than the game was possibility of the return of Dutch Oven!
Posted by BaronVonJ at 12:05 PM

Very cool terrain setup. Is there a how to for any of it?

I think Warren does a play-by-play in the link.

Nice report, this terrain is wonderful!!