Not Orcs, just the way GW has, over the years convinced us the Orcs have green skin. And the exact shade across multiple orcs. Humans don't have the same color skin, why should Orcs? Which got me thinking. In the recent past, when I have painted Orcs I gave them different shades of green skin. 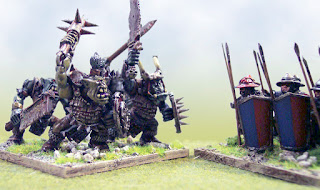 Then I was digging through some old lead and found Grenadier Orcs I painted as a teenager in the 80s. Brownish gray. I opened my Monster Manual from the same period, the only trusted source for all things monster. Sure enough, there it was in black and white: 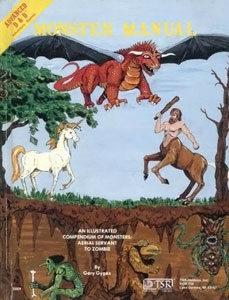 "Orcs vary widely in appearance as a result of frequent crossbreeding with other species. In general, they resemble primitive humans with grey-green to brownish skin covered with coarse hair. Orcs have a slightly stooped posture, a low jutting forehead, and a snout instead of a nose. Orcs have well-developed canine teeth for eating meat and short pointed ears that resemble those of a wolf. Orcish snouts and ears have a slightly pink tinge. Their eyes are human, with a reddish tint that sometimes makes them appear to glow red when they reflect dim light sources in near darkness. This is actually part of their optical system, a pigment which gives them infravision. "..." Orcs prefer to wear colors that most humans think unpleasant: blood red, rust red, mustard yellow, yellow green, moss green, greenish purple, and blackish brown. Their armor is unattractive besides—dirty and often a bit rusty."

So I went about painting a new orc using one of the many plastic GW orcs lying around the plastic pile. 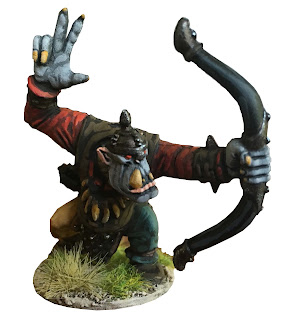 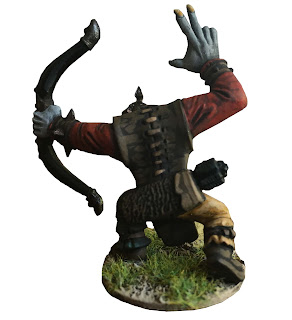 I really like the results.
Posted by BaronVonJ at 12:53 PM

So much of the original orc description from D&D is lifted out of Tolkein, and I think the movies' version of the orcs reflects that same vision: a mixed, mottled coloring. GW, I can only surmise, wanted something more cartoony, alien, and consistent to help teach people how to paint. But I find the green coloring, especially when it appears in D&D, to look silly.

I actually do like green skinned orcs (and goblins), but there's nothing wrong with using other colors either. Even though I choose to use green I don't use the same green for all of my greenskins - although some people might find some of the colors garish.

I notice that quote also says they have snouts, not noses. Maybe "pig-faced" orcs are a breed apart from the greenskins with noses? :)

Great shade you've chosen there. I'm quite taken with it. Given that orcs are a bit chaotic, there should be far more variability in their skin tones. Presumably it'd be a source of tons of (appropriate) antagonism between the different groups too.

Looks good. I do prefer the LOTR colour schemes which match very closely to the description you quoted above.