Fistful of Lead: the Campaign 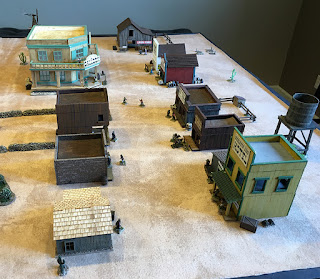 Last night we had 4 players, and one wanted to try the campaign rules fro Fistful of Lead. I took about 5 minutes to make the gangs (bonus!).
I took 2 guys with pistols, 2 with rifles and one with a shotguns. This went over the 12 point allotment by 1, so I gave the shotgun guy (not naming these guys until they survive a game or two) a Negative trait to subtract a point. He "Buckets of Bullets", meaning if i rolled a "1" or out of ammo result, I roll again. On a 1'2' or 3, he's out of ammo for the game. 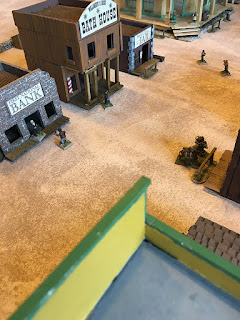 I gave my Leader a Positive and Negative Trait, thus cancelling each other out points-wise. He got "nerves of Steal" allowing him to ignore the first Pin result. For his Negative he got "Sickly". Players add +1 to the wounding rules against him.
I broke my rule and named him Plegmy Phil Fuchs, leader of the Dirty Britches Gang.
With everyone's gangs made we pulled cards fro the scenarios. We decided to use the same board, each group playing their adversary, basically ignoring the others (more on that later). Of course, the question was "Can we shoot at the players I'm not directly players?". I simple shrugged.
The first scenario was "the 4:10 to Yucca". Doug, having captured Scott's leader had to run the gauntlet of the town to the stage at the other end, bound for the infamous Yucca prison. SCott had to stop him. 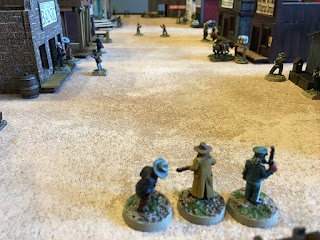 "All right boys, let's kill this snake."
My mission was "Headhunting". I simply had to kill the leader of opponent, Brett.
We all shared a deck. The first couple of turns were spent maneuvering. I guess I failed because the first shot of the game put down my shotgun toting gang member, wounded. Brett tried an end around down the back alleys, keeping one gang member to cover them from the Saloon.
Meanwhile, Doug took his hostage into the same saloon while his gang attacked Scott out in the streets. 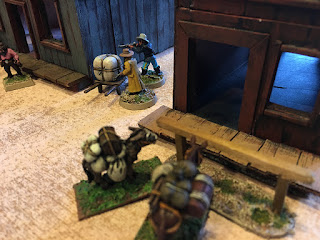 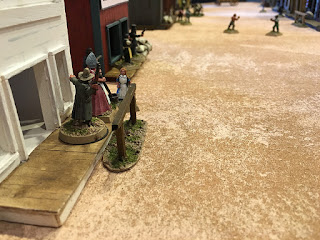 Tsk, tsk. Using civilians as cover.
No one actually shot at players not involved in their scenario, but they did use them as cover.
We were all on a deadline. We had six turns to do our various deeds. Beyond that, the stage would leave, or the law would shut the whole gunfight down.
I was able to outflank Brett on the fifth turn, and using a One-Eyed-Jack, shot his leader leaving him wounded. When Brett rolled to get him up, he got a "1". His leader bled out in the street.
Five Renown for me.
After Scott gunned down must of Doug's gang, he cornered him in the Saloon. Doug made a run for it, and risking hitting his own leader, Scott fired.
Thunk! Scott's leader was free. His captor dropped dead in the street. 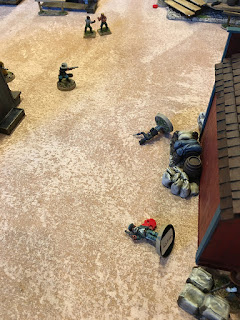 Crusty's down. Down worry, he survive the Mexican War, he'll survive this.
A great couple of gangs and showed the versatility of the rules.
We did the after gang turn to see who was really dead and what happened to the wounded.
My leader made a full recovery, but wounded shotgun, now named Cletus, has to miss a game. I used the Renown to "buy" a new member for the gang.
Brett's leader was dead. Or was he? The campaign rules have a "Lucky" rule. Basically it allows you to save one member of the game, even dead ones. The bullet hit the family picket bible. or a whiskey flask, etc. Which ever way you want to explain it, his Leader made a miraculous recovery.
Scott bought a new guy for his game. Doug had two die of their wounds.
Next time, we'll switch players and the Dirty Britches Gang will ride again!
Posted by BaronVonJ at 12:05 PM

What a great looking game and a really busy, bustling town, a bit lawless though...... :-)

Looks like a great game was had. I really need to check these rules out. I've got a bunch of painted old west models and a town that hasn't seen any action for quite some time.

PDF available through wargame downloads and wargamse vault. Hardcopies through me, and soon Knuckleduster.