Campaign for Kingdom: Batle of the Lonely Tower 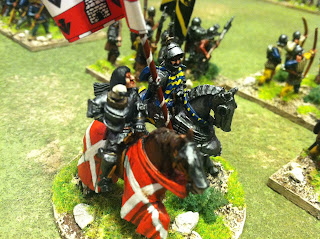 Last night saw the brave Lionel of Stonekeep (me) a few battles away from grasping the crown once and for all. Across the field were the forces of Roderick the Younger (his father and grandfather already killed in the campaign). 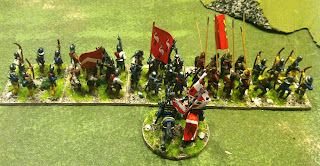 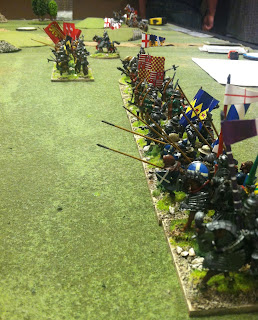 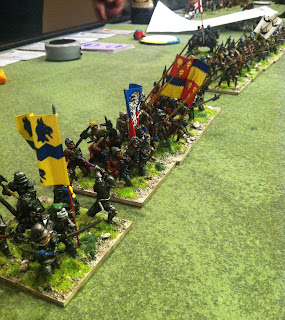 Both had nobles at their side with their own loyal retinues. Unfortunately for Lionel, both his allies were buffoons (not insult, that's what their randomly rolled leader rating were.)
It began as usual with an archery duel, with both sides seeing off a few of their enemy's units.
But, also as it always does, the battle came down to the scrum in the battleline.
One of Lionel's general's Ulrik, played well by the Boy, had horrible luck with the dice. He had one of those turns. A turn where the whole game is in the balance, and you have only to roll the dice....
He only needed 6s or below on a 10 sided die. He did not get them.
The next turn, his opponent crushed his whole force. 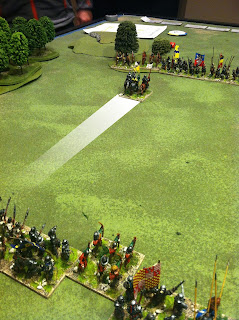 The cavalry hear "CHARGE" when the order was "maneuver". The paid the price. 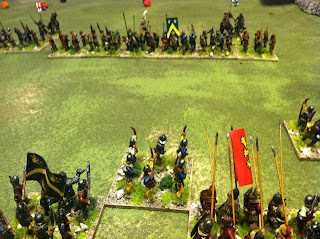 But the fault was not all due to the buffoonery of his nobles. Lionel had some terrible luck too.
In the end, Lionel's head would decorate Roderick's lance and the Kingdom braced for another battle. 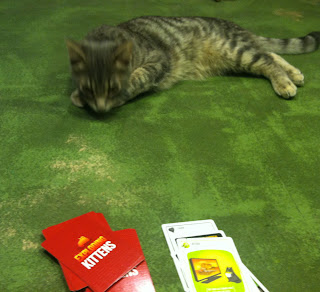 The game ended so quickly we got in a game of Exploding Kittens with our own kitten watching.
Posted by BaronVonJ at 10:31 AM

Looks to have been a fun game I wish I could have made.