Barrels of Fun- A Fistful of Lead: Horse & Musket AAR 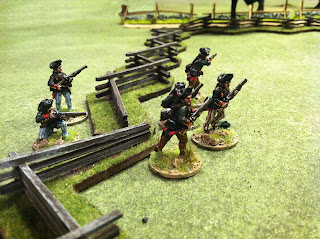 With the finish still wet on my Hessian Jaegers, and troops and terrain from John at Curio Clashes, we took the field to try out some amendments I made to the Fistful of Lead variant for Horse and Musket era.
Most of the rules are the same, but Close Combat is slightly more dramatic, shooting automatically gives you a reload marker, in this case smoke (no six shooters here), and a few cards act differently. But, essentially the same game we know and love. 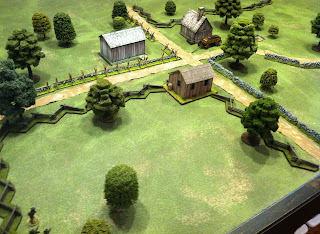 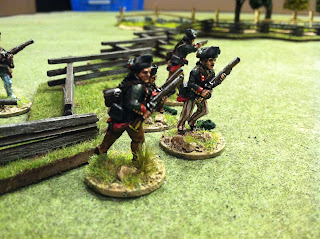 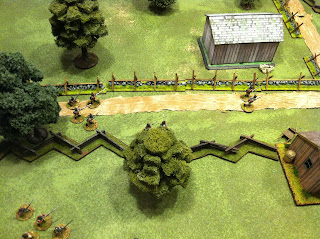 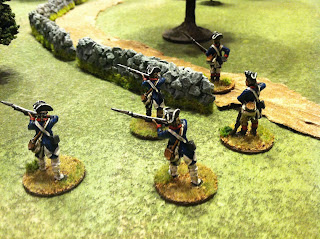 The scenario: A fresh wagon load of much needed gunpowder for the Rebellion has been left at Fleckal's Farm. The farmer, spooked by news of a Redcoat patrol, has taken off with the only horse to the wagon. The Continental army needs it. The Redcoats and their Hessian allies would be happy just to blow it up.
We had 7 players. Three ran the Redcoats with 6 models each. The 4 Rebels each had 5 models, only slightly outnumbering their oppressors.
First to turns were spent mostly maneuvering.  The Hessian (me) got in range first and unloaded a mostly useless fusilade against a well protected group of Continentals hiding behind a wall. That means the next turn I spent mostly reloaded (COME ON SIX CARD!).
By turn 4, the British had made a run for the wagon. One was gunned down while the other managed to light the wagon. At the end of the turn, we rolled a die. On a "10", BOOM!. If a 10 wasn't rolled, it added a +1 to next roll at the end of the next turn. Alas, we rolled a "9", and the very next turn the Rebels managed to stamp out the fire. 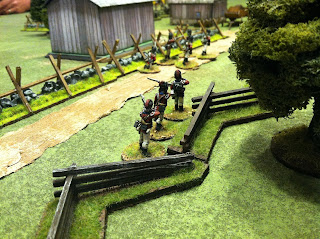 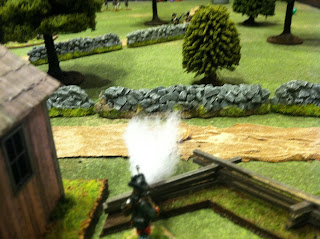 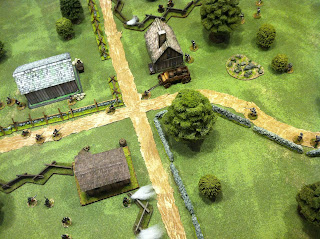 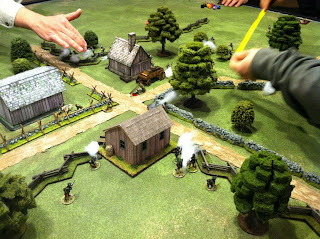 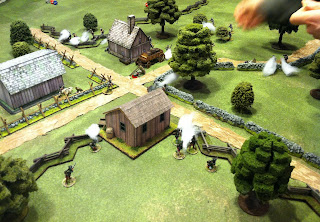 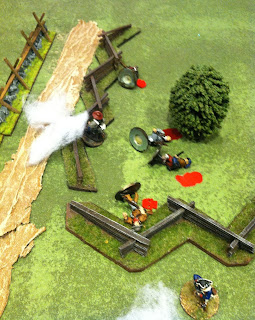 Over the course of the game there was alot of close combat and death around the wagon. For a while it looked like the right flank of the Rebels, held on;y be Militia, might crumble, allowing the Redcoats to flank that horrible wall.
It was not to be. As in all FfoL games, somewhere near quitting time, the Wound rolls just keep coming up "Dead". Today the Continental army would have it's day. The last Hessian Jaeger slunk off the find a nice Pennsylvania Dutch girl and settle down, while the last British survivor had bad news for Command.
Tweaks worked out great. 38 models on the table, 2 hour game. Most of all, everyone had fun.

Nice write-up. Fun game with lots of action and blood. Kudos to Doug for tabling his first ever batch of minis snd providing the Sam Adams (quite apropos for the evening). Good times.

I wish the basement generals lived in Wisconsin. They seem like a fun bunch of dudes...

We are very lucky.

Enjoyed that one tremendously. The musket reload makes you think about when to take a shot and heaven forbid a 1 is rolled. Terrific game mechanic.

Jon, those new style trees are fantastic. have to build some of those.

Yeah Jon. Really like the trees. Have to show me how you did them sometime.